Here on campus, most people know me as "Jul"! I am a Religion major who is interested in eventually working in the field of law. At Dartmouth, I am a sister of Alpha Phi, a current member of the varsity Track and Field team, and also played a year on the varsity Basketball team. When I'm on campus, my favourite things to do are get breakfast at Lou's and go to football games. When I'm not on campus, my favourite things to do are travel and visit my family and friends.

While I am having an unbelievably great time studying at the University of Edinburgh this term, I can't help but miss Dartmouth a little. Fall is one of my favourite times on campus and the majority of my friends are studying in Hanover this term. My academic schedule here in Scotland is quite flexible and during a phone call with my dad in October, I decided to buy a flight back to Boston to visit Dartmouth for Homecoming. When I told my friends on my trip here in Scotland I received two responses:

Question 1: How? Travelling to and from Scotland during the fall and winter isn't the easiest task. After the tourism season ends, there aren't many direct flights to Edinburgh. I was lucky enough to find a flight with a short layover. On Thursday morning, I boarded a flight from Edinburgh to Reykjavík, Iceland. The flight was just over two hours and when I landed in Iceland, I had a 2.5 hour layover. This was the perfect amount of time to grab some food and stretch my legs before the longer flight to Boston. That flight was 6 hours long and I landed up sitting beside two alumni who were also headed back to Hanover for Homecoming! I had downloaded some movies onto my laptop and got most of my homework done. Once I landed in Boston, it was 7PM local. My best friend was gracious enough to come pick me up because she has a car on campus (I could have also taken the Dartmouth Coach which offers direct service from Boston Logan to Hanover). We stopped to eat and were back on campus around 11PM. At this point, I had been awake for almost 24 hours. As soon as we drove up to campus though, the jet lag was so worth it - I was home! 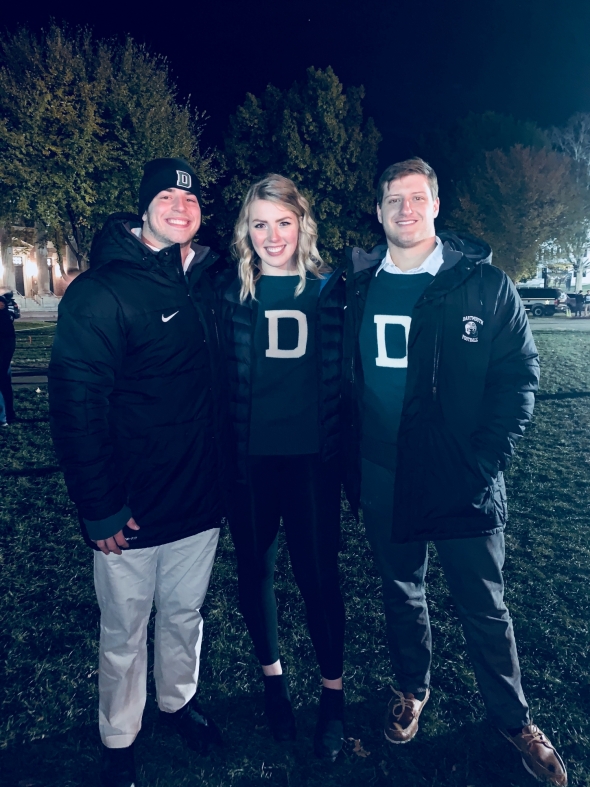 I got to see some of my best friends!

Question 2: Why? Not only have some of the best memories that I've made at Dartmouth been during Homecoming weekend, I have to admit I was feeling a little homesick. Because many of my friends are taking the winter term off, I wanted to see them and spend some time with them. In addition, my brother goes to school in Boston and we hadn't seen each other in awhile. It was great to be able to see him when I was back for Homecoming. I was also able to check in with with my teammates and coaches to see how our on-campus training is going. Lastly, the University of Edinburgh runs on semesters, not terms. This means that I am not done exams until December 20. My little trip to Dartmouth acted as an exact mid-semester break.

Here are some of my memories from the weekend.

Making a Difference (At Home Edition!)

The Dartmouth Center for Social Impact (DCSI) is a hub for students seeking community service opportunities.