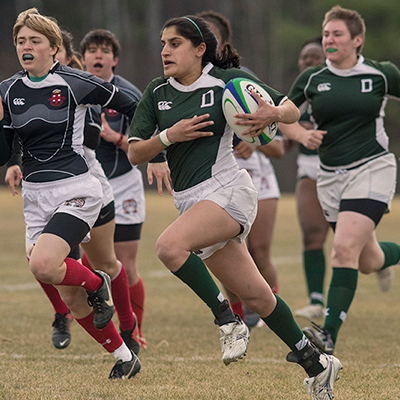 From the laid-back sports fan to the aspiring Olympic athlete, Dartmouth offers plenty of opportunities for sportspeople of any interest level and ability. With state-of-the-art facilities and the stunning outdoor venues of the Upper Valley, there's never a lack of new activities to explore. It's no wonder that 75% of the student body is involved in sports. With everything from fly-casting practice on the Green to downhill racing at the Skiway, here's the breakdown:

With 30 Division I varsity teams, the Dartmouth Big Green are known worldwide as a member of the prestigious Ivy League, where our athletes compete against a collection of the nation's oldest schools. The most demanding tier of Dartmouth athletics, our alumni include an immense number of Olympic athletes and numerous professional players across a range of sports. With free admission for all students to regular-season games, there's never a lack of cheering fans to pack the stands.

Dartmouth's 33 club sports teams vary from nationally competitive to casual and recreational. From Water Polo to Tae Kwon Do, these student-run squads compete against other colleges across the region. Some clubs hold tryouts whereas others are open for sign-ups, all which depends on the competitiveness of the organization. Much less of a commitment than a varsity sport but far more than intramurals, club teams often have practices sporadically throughout the week and usually play games on weekends.

The most casual and beginner-friendly tier of Dartmouth's athletic hierarchy, intramural sports are a fun way to get active without making too much of a time commitment. Students organize teams and compete against each other in a multitude of sports, all of which have different skill-based brackets to make sure that the matches stay competitive. Also a fun and cheap way to try something new, Dartmouth's IM scene is super inclusive and is available to anybody who can gather up a couple friends. 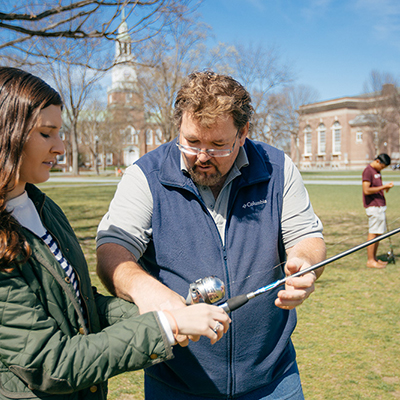 Physical Education courses offer students countless opportunities to get active for credit. From dance to martial arts and from yoga to skiing, Physical Education experiences are lead by undergraduate students and faculty alike on activities they're passionate about. Some are even Dartmouth Outing Club-sponsored programs, which involve weekend excursions to explore New Hampshire's scenic countryside. Unlike other courses, PE classes don't meet in normal blocks. Rather, they get together at different times during the week, usually with very lenient schedules. A great way to give something new a try, students need three PE credits to graduate, and with a wide range of activities to explore, there's truly something for everyone!

Dartmouth boasts a wide array of beautiful facilities surrounding athletics and recreation. With over $94 million invested into our state-of-the-art venues in recent years, students are provided with the best resources possible to reach the top of their game. Some of these include:

From a student's first experience on campus to graduation day and beyond, Dartmouth Outdoors helps to create opportunities for the Dartmouth community to explore and enjoy the amazing natural landscape of New England. The Dartmouth Outing Club is the oldest and largest collegiate outing club in the country. Anyone—member or not—may stay at their cabins, go on trips, rent gear, and take classes, and funding and grants are available.

Dartmouth is defined by more than just buildings; seated in the picturesque Upper Valley, we like to use the terrain to our advantage. With the Connecticut River nudging up along the western edge of campus, there's always an open spot to row, kayak, canoe, or even go for a swim. Also, just twenty minutes from campus lies the Dartmouth Skiway, two mountains complete with a lodge and shuttle that runs to campus during the winter months.

Dartmouth is home to 35 Division I varsity teams, 33 club sports, and a variety of intramurals, so I assure you that there is a place to get involved here for student-athletes of all levels.

Did you know that Dartmouth is one of the only two colleges in the United States to own their own ski mountain? And here's the best part: you don't have to be an expert skier to have fun on the slopes.

Before I know it, it's already time to say goodbye to a somewhat unconventional freshmen year. The memories are here to stay, though. Here are some of my favorite snapshots of my freshmen year!

Rowing for Justice: A Team's Response to the Black Lives Matter Movement

In the aftermath of George Floyd, Breonna Taylor, and Ahmaud Arbery's tragic deaths, the Heavyweight, Lightweight, and Women's crews at Dartmouth decided that it was time to act.

Through the Lens: Varsity Sports

Read on for an inside scoop into the life of Dartmouth varsity student-athlete Maddie Grussing '23!

Being in West House means Tuk-Tuk dinners and fun house events almost every week, but this month it also means having the opportunity to join West House's Intramural (IM) basketball team.

Everyone was on their feet. The kids behind us were jumping up and down, occasionally spilling some of their popcorn on us. As the clock wound down, the whole arena was on edge as the orange ball flew from the hands of one team to the other.

I love water polo (and club sports in general) because they have become a way for me to stay active and make friends at the same time!

Some of my Favorite Memories

One term down, two to go! It's unbelievable to me that I only have two terms left here at Dartmouth before graduation!