I'm Michael Harrison '24 and I'm thrilled to be starting my college career at Dartmouth! Coming from my suburban hometown on Long Island, it's great to explore a place that is so geographically (and culturally) different. This year will be unlike any other, but I've already connected with wonderful classmates and faculty through FYSEP and New Student Orientation. I'm currently undecided on a course of study, but I'll be taking writing, mathematics, and economics courses this fall!

A Student's Perspective on Voting During a Pandemic

Because Dartmouth is located in the 'swing state' of New Hampshire, it's very likely that a presidential candidate (or two) will visit the area in an election year. (A swing state is defined as a state where the outcome of the presidential race is usually very close, so it is important for candidates to target voters in swing states in order to win the most electoral votes, and as a result the presidency.) This year, obviously, there won't be large rallies in support of political candidates on or around campus. But that doesn't mean this election is any less important, and it's nice to see all that campus organizations, the town of Hanover, and the Student Assembly have been doing to encourage students living in the Upper Valley to vote. So, for this blog post I think I'll reflect on what it means to be a college student during an election season and discuss why I think students have a unique responsibility to participate in the election process and have their voices heard.

In high school, I took your typical set of American history and civics classes. Don't get me wrong, I enjoyed learning about the history of political parties and the three branches of government. But to be quite honest, reading from a textbook is nowhere near as exciting as directly participating in an election as a college student. Dartmouth's Student Assembly has already run several voter registration drives, and I had the opportunity to vote early in my first presidential election ever at town hall just last week. That's a moment I definitely won't forget! No matter what your political beliefs are, Dartmouth's student body and faculty are strong believers in civic engagement, and that is something that I really appreciate! (As an aside: although I wasn't here earlier in the year, several Democratic primary candidates from Bernie Sanders to Elizabeth Warren came to campus in January and February to campaign. Pretty cool for a college that isn't in a major city!) 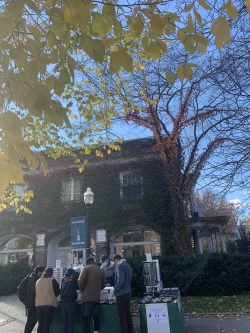 A recent picture I took of town hall - where many students have been casting their early ballots
Something I hinted at in the title of this blog post is the fact that voting this year won't look the same as it did in previous years for millions of Americans. The pandemic has placed severe limitations on the ability of people to canvas for a political campaign or to show up on Election Day at a crowded polling place. But Dartmouth students are clearly not willing to not vote at all, and it's great to see that hundreds of students have already registered to vote and requested an absentee ballot. And, while international students and students living off campus may not be able to participate in the New Hampshire election process, it's worth mentioning that publications like The Dartmouth and the Dartmouth Political Times do a great job of making sense of political and election developments for the wider Dartmouth community - and are staffed by students who fall into both of the aforementioned categories. You should definitely check them out!

One of the reasons why I chose to study at Dartmouth was its long history of student involvement in political happenings both locally and nationally. (I bet you didn't know both John F. Kennedy and Martin Luther King Jr. addressed students at the College in the 1960s). And even if it isn't possible for students to go door-to-door encourage the local residents of Hanover to vote or to host rallies for local and statewide candidates, it's still great to know that the Dartmouth community is still able to engage others in the electoral process.

I'll be sure to write more about the November election in the weeks to come. This has been such a turbulent year, and it would be a shame if anyone who cares about improving society didn't have their voice heard on Election Day. After all, elections are the most meaningful way in which citizens of a democratic country can express their opinions.

So to all those reading this right now who are based in the United States: it's not too late to get involved! Volunteer virtually for a candidate of your choosing. And even if you yourself are not able to vote in this election, make sure you family members and neighbors do. As for myself, I'm looking forward to seeing how else I'll be able to get involved with political events as a Dartmouth students in the years to come!