Sports, Songs, and Sanders: A Weekend at Dartmouth

As your humble guide through the college process, I will show you all that can happen in one short weekend at the College on the Hill.

I started off my weekend with a developmental rugby game against Norwich University, a military academy in Vermont. As someone who hasn't played a contact sport in their ENTIRE life (shoutout to all my cross country/track & field people), I can say with confidence that I had no idea what I was doing. But, it was fun! The people on the team are really helpful and I'm able to ask many questions when I need to. And hey, we won! 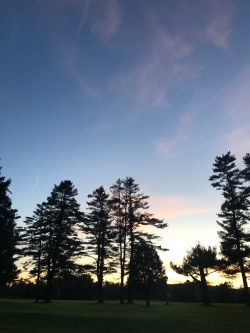 The walk home from rugby. Dartmouth skies are so beautiful!
Right afterwards, I had a meeting with Christian Union, one of the local Christian groups. After a lesson and some worship, the night ended with a McDonalds run to West Lebanon. It was the first time I have been outside of Hanover since First Year Trips, so it was a nice reprieve from the busyness of freshman fall.

The next day was also filled with a wide array of activities. To celebrate the Dartmouth football game that day, I went to my first Dartmouth tailgate! I was definitely not expecting to be wearing an inflatable hamburger, or running around the Green while bumping into my friend Levi, or making a makeshift banner at Collis, but it was super fun. Afterwards, we made our way to Memorial Field to watch the game. It was really nice, especially after winning—get this—FREE PIZZA at the game. I was sold: Dartmouth football games are awesome. But my night wasn't over yet. My friend Drew had tickets to a Lebanese band called Mashrou' Leila, a group that weaves social justice into their indie rock music and happened to be at Dartmouth for a couple of days. The night was filled with beautiful songs and thoughtful music videos, and I had a blast! 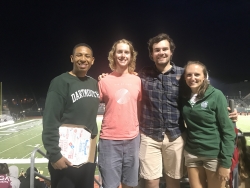 It was a fun first game (also peep the empty pizza carton)!
To end my week, I spent my Sunday going to a church nearby in Hanover, working on an essay for my writing class, and spending some time with my floormates and UGA during our weekly floor meetings. And who can forget watching Bernie Sanders speak at the BEMA (Big Empty Meeting Area)? That's another thing I'm excited for during my time at Dartmouth. With New Hampshire being a such an important state during the elections, I'm looking forward to interacting with the various candidates who come on campus. 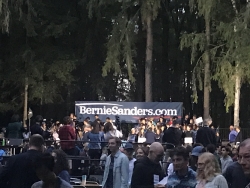 A picture at BEMA of the Bernie Sanders rally!

Yes, Hanover is a small town. But it is truly full of opportunities to experience life as a young adult and to make the most of your time at college. Not only are there TONS of clubs for every niche you could think of (there's even a Super Smash Bros. Club!), but there are so many events on campus happening that my inbox constantly fills up with reminders about them!