Missing the Dartmouth Wilderness in NYC

I had the opportunity to visit New York City with one of my best friends from high school over winterim. I had the pleasure of staying in his grandmother's apartment in the heart of Manhattan, and he gave me this wicked tour to see the Empire State Building, the Statue of Liberty, Times Square - the whole nine yards. I felt like such a tourist but it was such a valuable experience, largely because the finale was a showing of Hamilton...as a recovering Hamiltonian, that was an unparalleled treat and by far the best possibility for my first Broadway play. Ten out of ten. 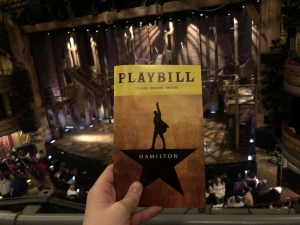 Couldn't leave the theater without snagging a playbill picture...basic, but...

Walking Times Square late at night and seeing crowds of people, and then speedwalking to Rockefeller Center to see a giant Christmas tree before running back to Manhattan for a midnight raid at Cafe 71 (my new favorite New York City deli) made for a highlight of my break.

The city is a fun place. Many of my friends at Dartmouth are from big cities like Chicago, Los Angeles, and Miami, to name a few. Coming from Stafford, Virginia -- a largely suburban town close to the history-packed but small city of Fredericksburg -- I have lived in the middle ground between urban and rural for most of my life. Hanover is decidedly rural, and when you hear that word, like I did when I was applying, you'll probably conjure up images of cornfields and barns and forests. It's easy to think that, but just walking the city, I was amazed by how much Hanover brings to the table for being "in the middle of nowhere." 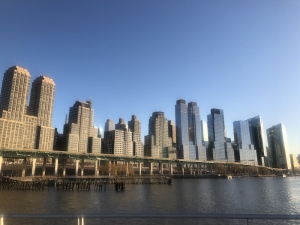 Between the restaurants downtown, the dozens of languages I've heard on campus, and classes that bring the outside world to you, I'm never left longing for city life. Just walking around New York City left me very nostalgic for my first-year trip hiking the Appalachian Trail with a hardy group of fellow first-timers, breathing in the freshest air and laughing away the feeling of our rainwater-soaked coats. What can I say? Hanover has a way of converting me at the very least to Team Wilderness, and I can't say I'd like it any differently.

Whether you're anxiously waiting for the finale to your college admissions journey or looking at Dartmouth for the future, I want you to know that I had plenty of concerns about going to a school in an environment like Dartmouth's, and in my head I imagined Dartmouth to be leagues away from civilization. But nothing ever feels far (save for seafood, sometimes). And FoCo (the Class of 1953 Commons, Dartmouth's premier all-you-can-eat dining hall) sushi nights helps a lot with that.

It's been a very personally productive break even though I didn't do an internship or structured job. Productivity need not be externally defined! Doing the internally fulfilling does wonders for both your mental and physical health, and in the time after you apply to college, you should find a way to go back to enjoying the little things. Before you know it, stress begone. I hope you all had a wonderful holiday season and that you're keeping warm.

The Jackets I Brought to Hanover

The ultimate jacket guide from an upstate new yorker.