Dartmouth has a pre-orientation tradition of taking hundreds of incoming freshmen into the wilderness for several days for a program we call First Year Trips. This blog post would be excuciatingly long if I were to detail everything that happened over the course of those five days; so, I am going to briefly highlight the highs and lows of trip E750: Ritchie Smith Cabin Camping. You should also know that "E" stands for the group section, "7" is the type of activity (camping), "5" is the distance from Dartmouth, and "0" is the difficulty level. (We beg to differ with the difficulty level we were assigned). 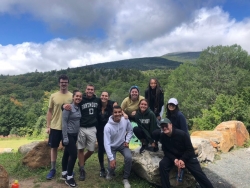 Day 1: I woke up at 5am to catch the 8am bus in New York going to Hanover. After a tiring seven hour ride, I met my trippies (the people I would spend the next five days with). I wandered Dartmouth's campus, played introduction games, and had my first taste of FoCo (Class of 1953 Commons) food.

Day 2: Group E750 boarded the bus and arrived at our homely cabin. I was particularly excited to sleep in the loft right in front of a large, framed window. This was the first time I had ever been camping, and I felt a sense of peace and calmness surrounded by the sounds of the rushing river. After a traumatic first use of the outhouse, I discovered my love of Cabot cheese and learned more about my trippies' academic interests, hobbies, and quirks.

Day 3: Danger day. I attempted to jump from one rock to another only to fall into the stream separating the two rocks. (Not my proudest moment.) I conquered my fear of heights by jumping off a rock into the river, but then I landed butt-first onto a large rock under the surface of the water. I contracted poison ivy on a hike that all my trippies went on, but only I mysteriously got the rash. Honestly though, the scars I have make it look like I was attacked by a rabid cat, which is pretty cool. The best part of the trip, however, was when a man named Bernie (who we later realized was a Dartmouth alum!) knocked on our cabin door. He played fiddle songs and we sang along as mac and cheese cooked on the stove. 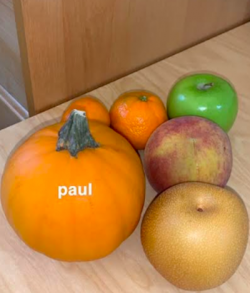 A wholesome, unrelated picture of my pumpkin "Paul"

Day 4: This was our last day in the cabin. We played an intense game of Monopoly and relaxed by the rocks near the river. We sang songs in the rain for two hours as we waited for the bus to take us to the Lodge (a log cabin at the base of Mt. Moosilauke where all the Trips groups would meet up).

Day 5: The bus took us from the Lodge to Dartmouth. At 3pm, the bus back to New York arrived. I was tired and desperately in need of a shower, but I felt a sense of connection and pride looking at the school I would return to the next week.

Although Trips were a great way of connecting with nature and trying new activities, I believe the real value of this experience was getting to know my Trippies. For me, O-week was overwhelming, especially because I did not know anyone else. Luckily, Dartmouth's First Year Trips Program ensures that you have a built-in support network before arriving on campus: a Trippie is never far from sight. Being able to recognize a friendly face and to connect over our shared struggles in the woods helped make the transition to Dartmouth less daunting.

Cabin Most: My Sophomore Trips Experience

My trippees and I did the most on our cabin camping trip; come learn more about my Sophomore Trips Expereince!