At this point, you've probably heard me say this at least, like, 17 times, but it's still worth repeating again and again. Online schooling is hard. Part of it is the difficulty of teaching yourself at home, but in my case, some of the difficulty is teaching the other people at home.

Now, I have two younger siblings, ages 13 and 7. I've never thought that in writing a blog about my time at Dartmouth, I'd end up talking about them. But, alas, this has what the world has come to I suppose.

This isn't my first time talking about them, by the way. I'm somewhat responsible for their education now, with the whole homeschooling thing and all, so I've been trying to do whatever I can in that regard. A couple weeks back I wrote about performing chemistry experiments with my little sister. At the time, I figured that since Dartmouth was kind enough to send me a free chemistry experiment, I might as well share it with my family. For the past few weeks, this time I figured that if my computer science professor was kind enough to give me a free textbook, well, I might as well share this one with them too. 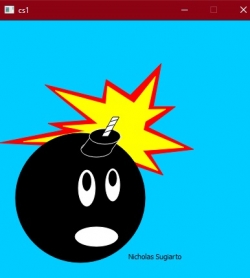 My CS assignment. Bonus points if you know where this is from!
So a bit of backstory first. I'm a biomedical engineering major, but before I can get into the major courses, I have to first knock out my prerequisites, one of those being Computer Science 1. I could honestly write a whole post about the class itself. The assignments are admittedly more fun than I expected, like building games or drawing images. It's all from a free textbook my professor wrote called https://www.projectpython.net. Check it out. It's actually pretty cool.

My sister has always been interested in code, which is now apparently in almost every elementary school curriculum. Of course, it's just kiddie stuff where it's more rearranging puzzle pieces than actual coding. But part of being a big brother is nurturing their passions, right? (Also, I'll admit that I'm a competitive big brother who wants his little sister to be smarter than other peoples' little sisters). So teaching her actual coding has always been on my list. But, I'm no teacher, so I'd need a lesson plan made for me. Well, why not the free Ivy League-caliber textbook?

My sister's code! It's mostly just print statements at the moment. All of it is Avatar the Last Airbender related. She's been watching it on Netflix and she is really loving it.
I'll be honest. We're still very much in the most basic of the basics. As much as I believe in my sister's abilities, it's still a college-level textbook. And my sister is smart, don't get me wrong, but if my seven year-old sister can master an introductory college course at Dartmouth's breakneck pace, well, I'd drop out of college and coast by as she becomes the next Bill Gates.

But the point is this. The fact that our professor gave us a free textbook of his own design is amazing. I've heard stories of professors at other colleges charging exorbitant prices for the textbooks they themselves write, constantly coming up with new editions for the same reason. And that never sat well with me. Maybe it's the Confucianism talking, but education to me is supposed to be egalitarian. You know, for everyone. And I'm just glad that Dartmouth is different. That the professors there aren't teaching to fill their pockets (though they are paid very handsomely). They're there because they want to teach. And if that means a free textbook for me and my little sister, well, I'm not complaining.