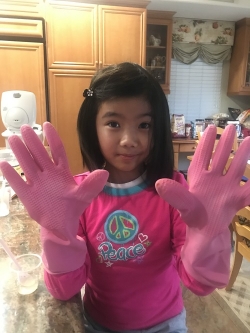 Over-sized rubber kitchen gloves because safety first! (Please disregard the flagrant lack of safety goggles and the lack of tied-back hair. That's on her. She should really know better.)
I'll be honest with you. I've said this time and time again, but there's nowhere I'd rather be right now than back on campus. Even what I thought would be the most tedious parts of my education I've ended up missing. Like my chemistry lab: a weekly trip to the undergraduate laboratory to run experiments for my introductory chemistry course. That program's been hit the hardest over recent events. I'd argue that it's pretty hard to replicate that online. In order to combat this, Dartmouth has started sending out little "chemistry kits" to us at home to do at home experiments. Now, I appreciate the sentiment, but I'll admit that I've missed having a lab partner. Luckily, despite being on such short notice, I was able to find a replacement. Enter my seven-year-old sister Audrey.

None of this was graded. These experiments were more a little care-package the chemistry department sent us as sort of an acknowledgement that they knew that this situation wasn't ideal, and everyone's trying their best. And that, unfortunately, a little plastic tub of pre-packaged chemicals is no endowment-funded chem lab, but it's the best we can do in this situation. But for my sister and I, well, it was more than enough. 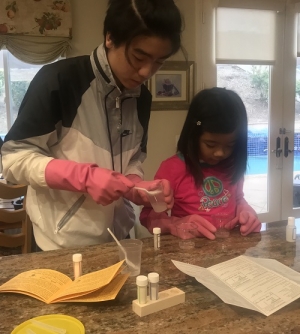 Our home lab setup. Very high tech, I know.
All in all? The home lab was overall a surprisingly interesting situation. Mixing various chemicals in my kitchen wearing pajamas felt less like Dexter's Laboratory and more Breaking Bad (my sister's Walter White, of course), but it was still all-in-all good, wholesome fun.

I wish I could make this story about how good a brother I am. How we did the experiment together, and I used this as both a learning tool myself and a teaching tool for her.

No. That did not happen. 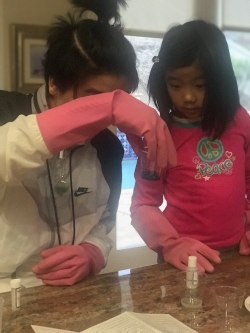 The end result! My sister and I concocting "bomb juice." For someone who was told that staring at it would cause it to explode, she's staring at it quite hard.
I'll admit, I spent a good portion of our "lab time" convincing her that instead of making a chemical iodide clock, we were actually making "bomb juice." And, here's the best part (or most horrible, depending on who you ask); I told her that if she stared at it too hard for too long… well… let's just say she wouldn't want to know what would happen next.

Yeah, I may have done some irreparable psychic damage there.

(I promise I explained that I was joking later, and tried to explain what was actually going on. I think she believed me. I think. I'm not sure she wants to risk it.)

Being a bad brother aside, it was actually nice for the chem department to even think about sending us this stuff in the first place. The longer I'm here, the more I consider people at Dartmouth my family. And it's nice to know that even as we're a coast apart, I can share that piece of Dartmouth with my family back in California too.