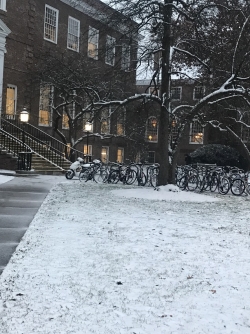 The classic "aesthetic" Baker-Berry Library in the snow picture. Cut me some slack. I was just excited to see snow for the first time okay?
When I was first interviewing for this blogger position, I remember that my soon-to-be boss's eyes lit up as soon as I mentioned that I was from San Diego, California, and that I've never seen snow before. I'm at least 90% sure that in her head, she was thinking "oh, he should write about seeing snow for the first time."

I say this because when I sat down with my boss for the very first time, she said "When winter comes, you should write about seeing snow for the first time."

In fact, I have a sneaking suspicion that this was the only reason that I was hired. And, once I finish this post, I will be promptly let go. 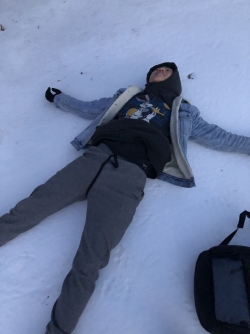 An ultimately unsuccessful attempt at a snow angel.
But, given how fun it was, I have to do it (Erin, please don't fire me). It first started snowing on a Wednesday night. I know the exact day because I was grabbing my weekly dinner with a friend and leaving FoCo (the school buffet). I came out to weird, white particles falling out of the sky. According to my friend, my face was that of utter confusion. It's because, well, I didn't know snow was that big. I thought it was about the size of sand.

When I say I've never seen snow, I mean it.

All in all? A pretty good time! 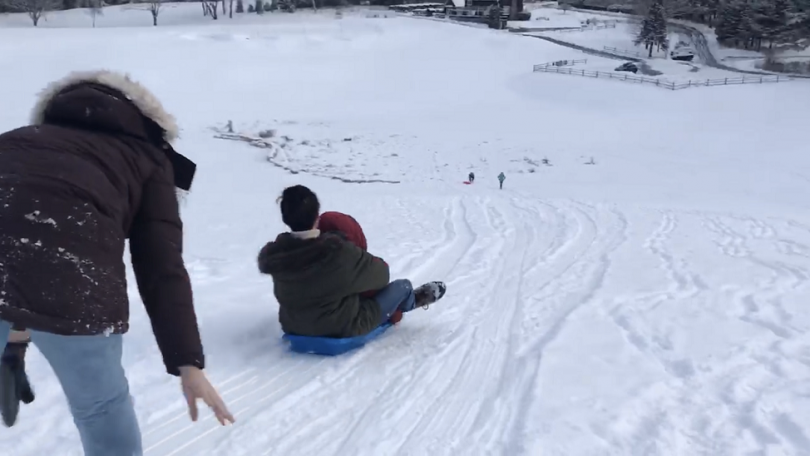 I would have uploaded the full video, but I was so terrified sledding for the first time that I may or may not have yelled a few things that were not exactly blog-friendly.

Each experience deserves its own blog post. Both because Dartmouth has so many rich traditions behind snow, and because I'm trying to prolong my unemployment (thanks Erin!) And I'm learning along the way, too. For example, if you're engaging in a campus-wide midnight snowball fight, and you're the only person on the entire campus with hair resembling a pineapple, people will recognize you in the dark, and you will end up cowering on the ground in the fetal position as your club president pelts snowballs at you while berating your lack of work ethic. 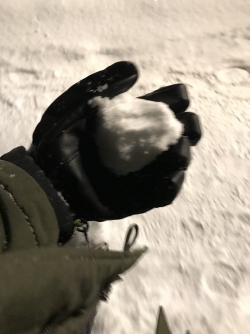 But I'm grateful to be able to write so much about snow because, if I didn't come here, this wouldn't have been possible. I recently spoke to some students from my old school, and they asked if I was scared to be away from home, to be in an environment so unfamiliar to everything I've ever known. I asked them, why?

College isn't very long. I've only just finished the first term of my first year, and I'm already terrified that it's going by too fast. But, maybe it's going by so fast because everything is new here, meaning that everything is fun here. Kinda like that overwhelming joy babies feel when they're in a new playground for the first time.

College isn't very long, and in being in a place so far and so new to me as Hanover, well, there's just so many good stories I get to keep with me once I finish.