Hey y'all! My name is Natasha, and I am a junior at Dartmouth College. I'm majoring in history and minoring in public policy and Chinese. In my free time, I love to watch New Girl, hang out with my friends, and explore the Upper Valley. Dartmouth is a pretty neat place— I hope you enjoy reading my posts about life here!

History Major and Minors in Public Policy and Chinese

We're Not in Hanover Anymore...

One club I'm involved in on campus is parliamentary debate. Parliamentary debate involves being able to speak extemporaneously and reason through arguments on a wide array of topics. Although I didn't debate in high school, I was excited to try something new and expand my horizons. After a tryout process, I was accepted onto the team and started to learn how to debate! Like many other clubs on campus, the parliamentary debate team club is a traveling team. As a traveling team, we get the opportunity to travel to different places outside of Dartmouth for competitions. This week, my debate team and I went to compete at Northeastern University! It was a fun learning experience and a nice break from my daily life as a Dartmouth student.

Because Northeastern University is located in Boston, it took us only two to three hours to drive down there. After we checked in, the first round of debates started! Two more rounds of debating followed, and we finished our last round at about midnight. Still pumped from the thrill of debating, we decided to play a game of Ultimate Frisbee on the nearby field. To end the night, we all ate some McDonald's while watching Grey's Anatomy (shoutout to Dartmouth alums Shonda Rhimes and Meredith Grey!)

The next day, we had two more rounds of debating to do. But, on our way to the building, we got stuck in the elevator! Thankfully, after we called for help, some policemen and firefighters came to help pry the elevator doors open so we could leave. 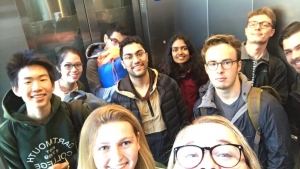 The Debate Team Stuck in an Elevator!
We finally arrived at the auditorium and started to debate for two more rounds. Through debating other college teams, I learned a lot more about different issues that face our society. I also think that through debating in more and more rounds, I became a stronger debater as a result. But even more importantly, I met some fantastic people at this tournament. From bonding with my teammates to meeting other debaters from colleges in the Northeast, debate has given me an outlet to meet interesting people and improve both my speaking and reasoning skills.
Posted 11/3/2019 at 2:00 PMAll Text Posts