On October 13th, Indigenous students at Dartmouth collected in a celebration of Indigenous Peoples' Day — a holiday to be celebrated with enormous precedence at the College, which was originally founded with the purpose of educating students native to the Abenaki lands that we call our campus. To kick off the celebration, we welcomed 60 prospective students to campus with a drum circle on the Green at midnight, where an Abenaki drummer sang old songs and new ones in a special harmony that celebrated the history of this landscape that almost five-thousand Dartmouth students can call home.

As a prospective applicant, I can't say that I paid much attention to the background of Dartmouth in regard to the Indigenous people that once called this land their home. Understandably, as prospective applicants, the culture that is intrinsically tied to this land is often glossed over or taken for granted. We don't think of the bounty of knowledge and beauty of understanding that this terrestrially ancestral wisdom imparts, most beautifully via the medium of music. The drum circle is just one of several events that Dartmouth hosts every year to celebrate Indigenous culture.

It was beautiful to be able to hear the songs that the Abenaki have sung for generations and share them with students looking at Dartmouth as a potential place to spend the next four years of their life. It was beautiful to hear Dartmouth's Native Hawaiian and Polynesian club Hōkūpaʻa sing a mele — a song — in protest of the Mauna Kea crisis and share valuable perspective on global Indigenous philosophy, valuing family, land, and tradition. It was beautiful to hear songs sung by Native students (lovingly referred to as NADs — Native Americans at Dartmouth) in Navajo and Choctaw. This is a diversity that is uniquely Dartmouth, and we can proudly say that Dartmouth has graduated more Indigenous students than the rest of the Ivy League combined (the result of a recommitment to Native education — Eleazar Wheelock's founding purpose for the school!) 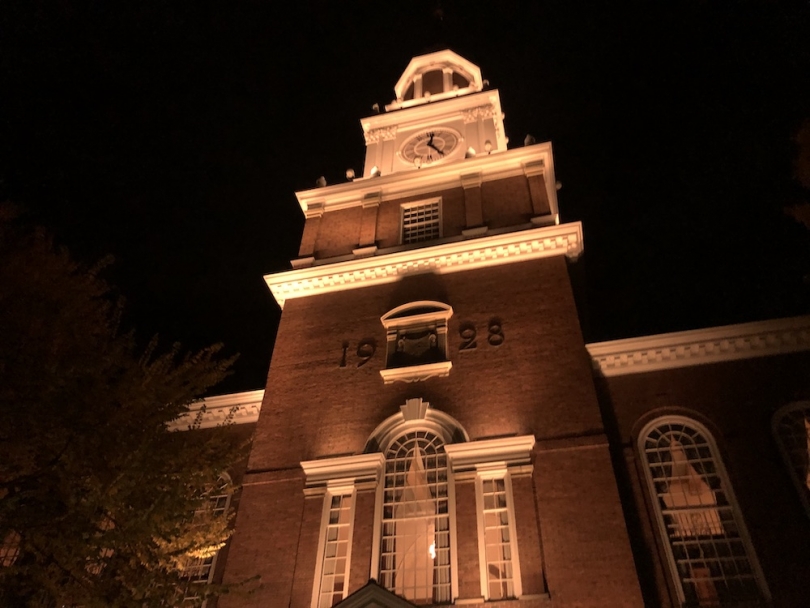 While I didn't snag any pictures of the ceremony, the Full Moon seemed to really highlight Baker Library in celebration on our way back from the Green.

When I applied to college, one of the most important factors to me was multiculturalism — I wanted to be exposed to as many different cultures and languages as possible. Eating dinner with my fellow Native students and hearing them introduce themselves in the languages of their tribes and peoples was not only uniquely beautiful but enriching in a different way entirely. This isn't cultural exposure via books, but instead a singular way to connect with peers in a special type of expression. Linguistically, culturally, and socially it has made every second the happier to be able to have this opportunity while at Dartmouth.

The diversity that exists because of Dartmouth's Native community is just a slice in the large pizza that campus really is. I've already brushed against so many different cultural groups each energetic and vibrant, showcasing culture via food, dance, and language for campus to enjoy. I've said previously that I never envisioned Hanover to be as enriching as it was, but now, going into Week 5, I've only been made more proud of my school and eager for more experiences that let me look through these new perspectives.

I hope to attend and report back to you all with as many new developments and accounts of Indigenous events at Dartmouth during my time as a writer for you all, and will likely have more for you in only this month. In the meantime, mahalo for reading and a hui hou — until we meet again!

Despite how long it's been since I was physically on campus, my sense of belonging as a Dartmouth student has never wavered.

Making a Difference (At Home Edition!)

The Dartmouth Center for Social Impact (DCSI) is a hub for students seeking community service opportunities.