Hello friends! My name is Diana D'Souza and I am pursuing a double major in Economics and Chinese. On campus, I live in the Humanities LLC and write for the Opinion section of The Dartmouth. I also serve on the Women in Business (WIB) Executive Board as the Co–Alumni Relations Chair. In my free time, I enjoy swimming, curating Spotify playlists, and baking with friends.

When the first blizzard hit campus, I whipped out my L.L. Bean boots and my knee-length parka. As I trudged to class, I felt overwhelmed by the day's workload until I found a mysterious email in my inbox titled "Would you, could you, in the snow?" The sender was Theodor Geisel aka Dr. Seuss, who urged every student to "come and throw some snow with me / you will like it, you will see!" 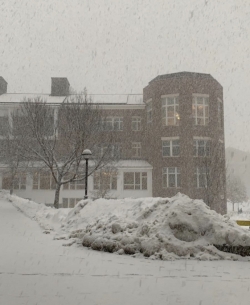 This is Kemeny, which houses the Math Department, encased in snow.

Yes, my friends, it was time for the infamous Dartmouth snowball fight, where the entire college is summoned to the Green (the center of campus, right in front of the Berry-Baker library) at midnight to have a massive snowball fight. My floormates and I banded together, and by the time we arrived, the snowball fight was already in full swing. People were wrestling, running, and screaming in the powdery snow. One brave soul even ventured on top of a thin, five-foot high pile of snow and ice and allowed students to pelt snowballs at him.

In that moment, I felt like a child again—solely concerned about hitting anyone who dared to hit me with a snowball. It was a much needed break and I left a half-hour later feeling mentally refreshed and giddy with laughter. I swear there's something magical here at Dartmouth.

I also have some bad news to break to you. If you read my first post, "Who Am I? A Plant Mom," you know that I adopted a plant named Snowball at the beginning of Fall term. During the six-week winterim, Snowball was left relatively unattended to. Most of her leaves have fallen off, and she has turned an unflattering shade of brown. Tune in to see if I can revive her!

Although Dartmouth's campus can seem remote at times, there are actually lots of fun places to explore nearby! Read all about my day trip to Burlington here!

My Trip to Mink Brook

With the weather slowly turning towards spring and midterms (mostly) over, my friends and I decided to take a little trip down to the stream for some swimming.

As a student trapped in the pandemic for over a year now, I can vividly see the light at the end of the tunnel as I begin my vaccination process!

We Hiked A Mountain??

Dartmouth is a very outdoorsy place. However, you don't need to be involved with any outdoor clubs to fully experience the outdoors Dartmouth and the surrounding area have to offer. Sometimes, you just need a free day and some friends!

Making the most of a virtual spring term on campus!

As I navigate a virtual senior spring term, I'm taking account of all of the fun ways to enjoy this term. Here's a list of three of my favorite spring activities!

What is your favorite thing about Dartmouth?

Today, I decided to walk around campus and asked my friends what their favorite aspect about Dartmouth is!

With decision day approaching, I decided to transport back to a year ago and share why I chose Dartmouth over other schools.

Dartmouth is home to a diverse range of students that will become your lifelong friends. For this blog post, I thought I'd interview a few of my fellow '24s to give you a glimpse into the crazy awesome people that make Dartmouth, Dartmouth!

In terms of fears about going off to college, I've noticed some recurring themes, both from my conversations with '25s and from my own experience. Read on to see my responses to some frequent questions and concerns!