The Center for Professional Development (CPD) posts winter break opportunities offered by Dartmouth alums on DartBoard. Students can participate in a Career Day (a one day shadowing experience) and/or an externship (mini internship). During finals week, I reached out to Colette Ellis '84, a life coach who aims to improve mental health in businesses and schools. She offered me a three-week externship at her company, Start Within Consulting LLC, in New York City, NY.

I faced many hurdles prior to starting my internship. First, I had foolishly packed seven pairs of jeans instead of my flats and button-up shirts. This meant I had to frantically drag my mother out (the day before my externship began, of course) to buy professional clothing and shoes. The second and more pressing problem was that my parents and I had no confidence in my ability to get to New York.

Now, you may be wondering how a New Jersey native doesn't know her way around New York. (In fact, I actually spent my junior summer of high school in New York.) I must confess that I spent many years aimlessly following others around, paying little attention to how the trains or subways worked. Luckily, with the help of the GPS and after asking many strangers for directions, I successfully arrived at Penn Station. After getting lost several times, I emerged victorious from a brutal 30 minute walk: I had finally arrived at Colette's office, which was located at the Centre for Social Innovation. 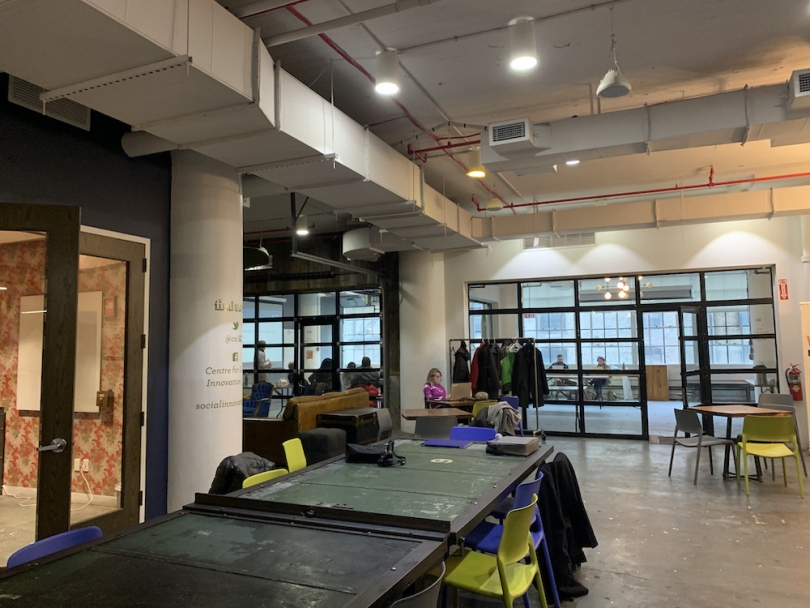 Behold the kitchen area of the Centre for Social Innovation.

The Centre was aptly named with a large kitchen area filled with blue and green chairs, an enormous chandelier, and oddly-shapped couches. There were also conferences rooms and an office area for those that preferred a more traditional work environment. I met Colette and the other interns (Mustafa and Kate, boths '23s) in the kitchen area. We spent the first couple days creating a list of goals and tasks, meeting other people that worked at the Centre, and asking Colette questions about Dartmouth and her role as CEO.

Eventually, we settled into a routine. We, the interns, would start the day by working on our personal projects. After Colette finished making calls or writing a script, she would drop by for a quick meeting to clarify any lingering questions. Around 1pm, we would break for lunch. The latter half of the day was devoted to presenting our work to the group, correcting any errors, and setting goals for the next day.

We were able to accomplish a lot during our three weeks together. I worked on podcast development by putting together bi-weekly podcasts: "Wellness Wednesday" and "Financial Fridays." I also worked on strategies for marketing her services to schools. Some of my responsibilities included composing emails, researching potential clients, and editing the Partner Empowered Education and Resources (PEER) Database. Kate served as the graphic designer—developing merchandise and stickers as well as updating the company website—whereas Mustafa served as the social media strategist.

My externship experience spoke to the strength of Dartmouth's alumni network. Even though I was a freshman in my first semester of college with little working experience, Colette graciously trained me and allowed me to shadow her. Thanks to Colette, I got my first stepping stone in my career and conquered my fear of taking the train alone.