This week, I attended a talk led by Associate Professor of Music William Cheng. Professor Cheng majored in Music and English at Stanford and then went on to get a Ph.D. in Musicology at Harvard. Last fall, he taught the wildly popular Comparative Literature course "Video Games and the Meaning of Life," where students actually got to play video games for homework.

We gathered in the Leslie Center for the Humanities and helped ourselves to refreshments: coffee, tea, seltzer, raspberry tarts, and a cheese and cracker platter (the food made my Friday that much better.) After we were properly fed and Professor Cheng gave us a brief introduction, he opened up the floor for questions. Many people asked him about his perspective on music to which he gave the most curious responses such as, "Anyone who listens to music is a musician." We then transitioned to talking about our personal experiences playing an instrument and whether being "made to play" an instrument affected our perception of music. 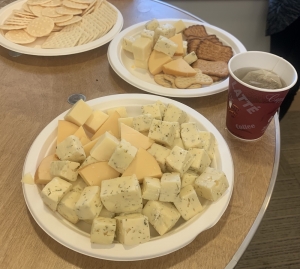 I was particularly surprised by how Professor Cheng's humor shone through his answers. He explained how his parents forced him to enter piano competitions, which he didn't like; however, he found it gratifying when he could play the same piano pieces as his brother. When his brother quit the piano, Cheng found it even more gratifying to surpass his brother. He also talked about how he is currently in the process of writing a book. He confided in us: "The first two sentences are perfect; the third is absolute garbage. I'm going to have to put the book aside until next week."

Cheng was equally passionate about his publications and research in history, media, ethics, disability, race, and video games. He explained that he started to study video games and music because they were two topics that he enjoyed, but he also believes that they have many things in common: they both require imagination, dexterity, improvisation, competition, and collaboration.

Professor Cheng graciously set aside an hour of his time on a Friday afternoon to speak to us, which demonstrates the caliber of Dartmouth professors and their willingness to engage with students. In fact, all of my interactions with professors at Dartmouth have been overwhelmingly positive. My Politics of the World professor, Katharine Aha, is writing my recommendation for my LSA+ (Language Study Abroad). My Chinese 22 professor, Chen Laoshi, patiently answers my questions during office hours. My Writing 5 professor, Annika Konrad, holds one-on-one thirty minute conferences with every student. Ultimately, the professors at Dartmouth are both educators and researchers that truly want their students to succeed—that's the Dartmouth difference.

How I Approach Course Selection

Course selection may seem intimidating, but Dartmouth provides an excellent array of resources—ranging from a faculty advisor to the Undergraduate Deans Office—to encourage academic exploration.

People, such as myself, often use sophomore summer to take a two-course term, which allows for a greater enjoyment of the term.

Conducting Projects for the Admissions Office!

One of the first projects I'll be working on is reviewing our content and messaging for international students.

Sophomore Summer is certainly the time to try new things at Dartmouth!

Pinch Pots at the HOP

Pottery at the HOP is just one among many free, affordable activities Dartmouth has to offer.

Dartmouth and the Liberal Arts

Dartmouth is known as a liberal arts college (LAC), but what does that mean?

The Dartmouth: What it's Like to Work for America's Oldest College Newspaper

When I entered college, I was super excited to join The Dartmouth news staff, which is, fun fact, America's oldest college newspaper. Journalism is an awesome way to grow as a writer, hear stories, work on a passionate team, and report the truth!

I highly recommend Comparative Literature 39.10: European Fairy Tales, or, as I affectionately refer to it, "the fairy tale class."

Although I'll be engaging in a variety of programs this summer, I wanted to first introduce the Tuck Business Bridge program, which I spent most of June partaking in!