Through the Lens: Directing Dance at Dartmouth

Dance has opened up an incredible community for me here at Dartmouth, but my experience has been limited to Sugarplum, just one of the numerous incredible performing arts groups on campus. In order to dig a little deeper into the world of dance on campus, I decided to interview Charlotte Chui '20, director of three dance groups at Dartmouth: Sugarplum, an audition-only contemporary group, Wild Things Workshops, and Street Soul, an open dance group focused on urban choreography, breaking, and popping. Charlotte is also a theatre minor and has played a significant role in growing the presence of dance on campus over the past four years

Dance at Dartmouth can be as structured or as unstructured as you like. You can take part in student-led groups (like Street Soul and Sugarplum), school-sponsored groups (like the Hopkins Center's (HOP) Dartmouth Dance Ensemble), take classes through the theatre department, sign up for PE dance classes with teachers in the Upper Valley, or attend workshops with guest choreographers brought in by students groups or the HOP. 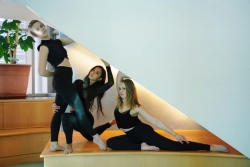 The HOP often hosts workshops with choreographers that are involved in the shows that are going on. My freshman year, they brought in Beyonce's choreographer—he was here doing a residency with the Dartmouth Dance Ensemble. There are also workshops and classes hosted by student-led groups all the time. Each student-led group is allowed to bring in choreographers from anywhere in the US if their appeal is approved by Dartmouth. We also have groups, like Street Soul, running open classes like Freestyle Fridays where you can learn from other students in a very informal setting.

Dartmouth primarily supports student dance groups by providing places on campus to dance other than Greek spaces, where we often host shows. For the most part, Dartmouth's role in helping us as artists is allowing us to perform on stage or in college-sponsored spaces. Some of the highlights include dancing on the Green for the 250th Anniversary Celebration, dancing on Gold Coast Lawn, or in Collis, which is one of the student centers on campus. Dartmouth has also invited Sugarplum to perform at large events such as TEDx and Dartmouth Idol, which I have also helped choreograph backup dancing for the past 4 years.

What is it like being a director of three very different dance groups?

I started directing all these groups [Sugarplum, Street Soul, and Wild Things] my sophomore year and am still directing into my senior Spring. I think what makes it extremely interesting but also challenging is that the groups function not only in completely different styles but rehearsals are fundamentally different for each group. Sugarplum is a very structured, student-run jazz contemporary group which functions almost like a company. Street Soul, is an open dance group allowing both beginners and more advanced dancers to learn about hip hop and urban styles as well as the history behind them. The fun part about being able to direct both groups is being able to see different sides of dance and learn about what dance means to a wide range of people -- from people who have been dancing their whole lives and taking classes to people who literally just saw a cool video and wanted to learn so they came to a Freestyle Friday or one of Street Soul's open rehearsals. It's always amazing to see the reactions of people who just performed in their first show. Wild Things functions completely differently than both Sugarplum and Street Soul and focuses on bringing together dancers on campus through workshops taught by choreographers from all over the US but also by some of our own talented dancers on campus. This is just as interesting and challenging but rewarding in a different way as it has allowed me to connect to members of the dance community in a unique way that doesn't involve performance and I think goes back to the root of dancing in the first place—community. 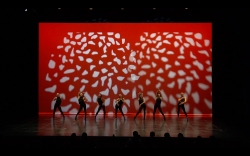 Sugarplum performing on stage in the Hopkins Center.

What is the audition process like for dance groups at Dartmouth? What made you choose Sugarplum?

I came into Dartmouth thinking that dance was not going to be a huge part of my Dartmouth career. I was a figure skater first and that's what I thought I was going to primarily spend my time doing on campus. I went to the dance showcase and found myself impressed by the majority of the groups. All the groups do an open rehearsal right before auditions if they are an audition-led group, which includes Sugarplum (contemporary/jazz), Sheba (hip-hop), Ujima (hip-hop), and Fusion (contemporary/mixed styles). There are a number of other dance groups, like Raaz (South-Asian fusion), that do auditions on their own outside of us, but for these four groups host auditions together on one of the first Sunday of fall term. When I showed up to auditions, I fell in love with the people of Sugarplum — it was the most fun room and it seemed that everyone loved each other. The energy was so great when we were dancing. People were giving me good feedback on what to do and what not to do but were also hyping me up! Sugarplum was also a place on campus where I could keep working on my technical abilities. I love hip hop—it is probably my favorite style—but being in Sugarplum has allowed me to grow technically in jazz, ballet, and contemporary. At the end of the day, because I was also able to be involved in another urban hip-hop group through Street Soul, Sugarplum was the best fit for what I wanted out of my dance experience at Dartmouth. 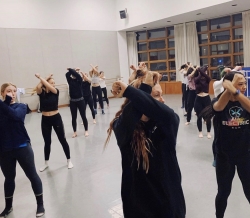 Guest choreographer Ashlee Dawson of So You Think You Can Dance and Broadway Dance Company working with Sugarplum on a piece.

What advice would you give to incoming 24s who want to get involved in dance on campus?

Before you come on campus, do your research. I wish I had known as much as I do now about the groups. I think that a lot of the groups have done a better job with their social media presence and being able to show you what they do, what their group environment is like, and giving you an opportunity to see inside of rehearsals. All of the groups have a very, very different energy and it is up to you what you are looking for. Choosing an audition group or a non-audition group is also up to you. You'll be able to go to the dance showcase during Orientation Week, the activity fair, open rehearsals, and ultimately auditions in order to make your decision regarding what is the best for you. At the end of the day, us dance groups are hoping that you pick us as well — you have to be able to be able to hang out with us, eat with us, and vibe with us. So make sure that you do your research in order to see what kind of environment you're looking for! 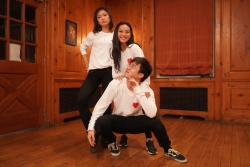 Charlotte and members of Street Soul.

What is your favorite memory of dance at Dartmouth?

I think that my favorite memory is honestly the end of year showcase that Sugarplum does. We are really, really lucky as we are the only student dance group that is able to have a full-length showcase focused on just us on stage in the Hopkins Center every year. It's always incredible, simply because there is so much love in my heart for all the people I'm dancing with. What makes the showcase so memorable is not just being able to dance on stage, but we also create a thank you video for our seniors every year. My favorite memories have been doing those videos for the seniors and hearing from other group members the ways that the seniors have inspired members of Sugarplum to become better dancers and better people. It just goes to show how important having this kind of community is to me and to all of us. Being able to do this every year is so inspiring. It's my favorite part of the showcase, playing this video between our two sets and watching the senior's reactions on the side. It's such an emotional moment for a lot of us because it's not just about all the hard work we put in as dancers but rather all the hard work we put in as people to make our community great.

Sugarplum dancers messing around in their new suGEAR.

The introductory dance showcase is held each Fall during Orientation Week, open rehearsals during the first week of classes, and auditions usually the next Saturday. For more information regarding dance at Dartmouth, check out Sugarplum and Street Soul's social media accounts!

Learning To Ski At Dartmouth

One of the best ways to survive and enjoy winter in Hanover is by finding something that makes you excited to be out in the snow. This term, I decided to sign up for ski classes at the Dartmouth Skiway.

Life in Hanover: How to Make the Most of the Winter!!

This blog is a guide to how I like to spend my time during winter outside of classes!