Like most incoming freshmen, I was absolutely dying to learn about my room assignment by the time spring rolled around. Days at my summer desk job were spent refreshing my inbox compulsively until on August 1st, the email finally came.

It said I was in Morton Hall in the East Wheelock housing community cluster. Where was Morton? What was Morton?

I'd heard about the Fayweathers, the Choates, and even the River cluster, but quite frankly, I had absolutely no idea where I was living for the coming year.

It turned out that East Wheelock is a house community that is, quite literally, all in one house. We have a cluster of four dormitories centered around the "Brace Commons" — the hub of our house community. Members of the house community all have guaranteed housing within the cluster for four years, meaning that there's a unique blend of old and new students who roam the halls. East Wheelock has actually been functioning as a housing community for 15 years prior to when what we now know as a house system was integrated into Dartmouth.

In 2016, two students left a hibachi grill on the roof and ended up burning down the top two floors, leading Dartmouth to reconstruct the entirety of the hall in a new style that would serve as a precedent for future dorm construction.

The hibachi boys have been added to the lore of Dartmouth — Morton especially, as "no hibachi grills allowed" has been added to our dorm constitution.

When my mom and I pulled into East Wheelock on move-in day with "Dartmouth or Bust" written on the back windshield, I knew I was home.

At Dartmouth, first year students live in either entirely first year floors or first year buildings with around 20 other students and an undergraduate advisor. During our first floor meeting of the term, I learned that I was living next to a nationally ranked runner, a hula dancer, a medieval jouster, and an award-winning painter! 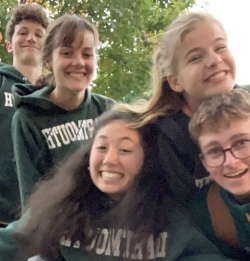 Me and my floormates Kealia, Jack, Kyra, and Peter!

There was a crazy coincidence that I realized pretty quickly after housing assignments came out: I had been placed right next door to my best friend from summer camp the year prior, Kealia Haitsuka. What were the chances? Given that you can't request roommates for your first year, I'd say pretty low. I write this as I sit on a beanbag in her room, munching on chocolate she brought from her native Hawaii, so thank you Office of Residential Life!

But it's not just Kealia who I'm spending time with on my floor; it's the rest of the wonderful people I get to live beside as well! Getting dinners at the Class of '53 Commons (Foco), movie nights with our floormate Jack's projector, and explorations around the Hanover area are not uncommon! Locking doors is unusual, and more than once have I fallen asleep in my neighbor's room.

I guess what I'm trying to say is that East Wheelock, as it turns out, is the place to be. My floormates are the neatest people I know, and I'm so beyond excited to have the opportunity to watch our little family grow over the next four years.