Ice Hockey with my Fraternity Brothers!

I was not expecting to play hockey when I was in college. I hardly ice-skated as a kid, and most of the sports I played were either track & field, cross country, basketball, or soccer. However, this term I had a chance to play in the intermural hockey league. Anyone can create a team, and the team will play a couple of games to get to the championships. And even though I was only able to play one game, I had a blast and made so many fond memories! 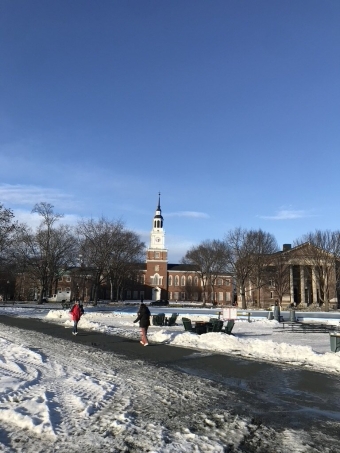 The cold weather here makes College activities happen indoors!
The team I played with was with my fraternity brothers, and our first game was late on a Monday night. Our group gets to Thompson Arena, which is the ice rink Dartmouth has. Watching the other game before us, our team gets giddy with excitement. We have been waiting to play, and for some of us, it is our first game. However, we find out that our team will be playing against a team made up of mainly the field hockey team, a discovery that makes us realize this game will probably not end well for us. I am one of the first to suit up, and when I get to the rink, I almost immediately fall. However, I can get my bearings and can stand up and somewhat move around, but I feel like a child skating for the first time.

The puck drops soon afterward, and in the first minute, the other team scores their first goal. It doesn't look good. We continue to play, but as time goes on, the other team's score goes up, while our number of goals stays at zero. 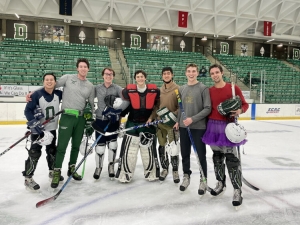 It was the last game for some of our teammates!

However, throughout the entire game, our team is laughing and cheering on our teammates. We have fun, even though we eventually lose the game 8 to 0, and one of our teammates broke his collarbone (he is okay now!) We didn't make the championship game, but we all had a blast. And not only that, my ice skating skills got better, in which I could skate pretty quickly by the end of the game (though I still couldn't catch up to the other team, lol). I'm glad we were able to have a Dartmouth winter experience; it really made my term!