You know, I think I'm learning a lot here at Dartmouth.

Which, you know, when you go to school at Dartmouth, you'd hope that that'd be the case. I mean, at the risk of sounding tacky, here you're surrounded by world-class professors, facilities, and classmates. As far as my experience goes, I have definitely learned a lot in the classroom, and I'm eternally grateful for it.

What I mean, though, is that since coming here, I've learned more than I ever thought I would outside the classroom. Things that I could have learned in a classroom, but for whatever reason never had the opportunity or resources before to. Since coming to Dartmouth, I've picked up how to use Photoshop, edit with Premiere Pro, build websites with HTML and CSS, as well as picking up things here and there with Flutter, R, and Bash. 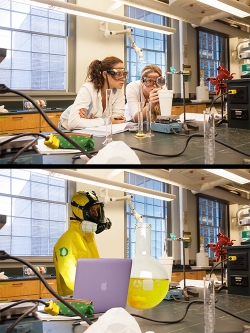 A little before and after of a Photoshop I recently did. I could give you context about why I decided to create this image but believe me when I say that it would explain nothing.
And none of it was through any of my coursework. All of it was just stuff that Dartmouth had for free, so I figured "eh, I might as well learn it." That's at least how I got started with Photoshop. I am unabashedly the cheapest person you will ever meet. Like, steal napkins from the dining hall cheap. I would list more intense things that I've done to save money, which Dartmouth administrators reading this blog would most likely frown upon. But I digress. I heard from the Dartmouth Jack-O-Lantern, the school comedy magazine I wrote for, that Photoshop was free and they needed people to Photoshop graphics. So me being a freshman with nothing better to do, I figured I'd give it a shot. Obviously I started off small, making spoof advertisements and such, but after continued practice and assorted web tutorials, I'm now making weird graphics like Jesse from Breaking Bad working out of a Dartmouth chem lab. So not necessarily progress, per se, but it's definitely been fun.

The same goes with editing. Since Adobe Premiere Pro was free, and the sketch comedy organization I'm part of held an editing workshop so I figured I'd pick that up too. Starting with stitching clips together, through trial and error I've gotten to the point where I've just recently edited a 15 minute Patriot Act-esque segment complete with greenscreen and infographics. Not to self-plug, but you can view an example of that right here.

Same thing with coding, too. Yeah, I know the very basics through my intro CS class, but since I've started helping code for a bioinformatics lab my skills have improved by leaps and bounds.

Really, Dartmouth has done everything they can to make learning outside the classroom possible. With everything I've picked up, I still have so much left to learn. But here if there's something you want to learn, chances are that it's there for you. Dartmouth even has free LinkedIn Learning for their students, so if I ever wanted to actually take formal lessons in Photoshop and PremierePro, I could—which is really the most I could ask for out of a school. I've said this time and time again, but Dartmouth is a nerd sanctuary. Deep in the woods with nothing to do but learn, surrounded by other people who feel the same. 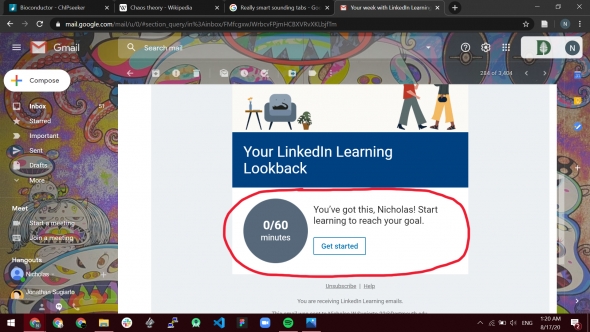 LinkedIn Learning is free to Dartmouth, and is an amazing place to pick up new skills. Or so I've heard. Idk... I signed up but haven't tried it yet. But I've heard good things! One day I'll try it, I swear.
Posted 09/6/2020 at 9:00 AMAll Text Posts