My Off Campus Life 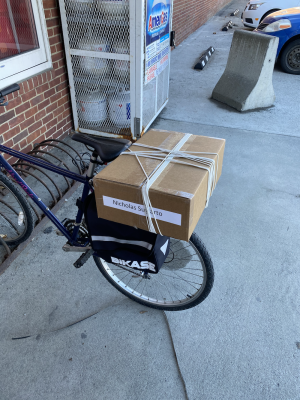 My trusty bike! It's how I get around the Upper Valley. Attached to it right now is some building materials for my engineering class that I picked up from the main campus.
For most of my (albeit brief) time at Dartmouth, I've been lucky enough to live on campus. Living on campus brings with it a ton of convenience, like being able to be a 3 minute walk away from the library, or using the gym. But, because of that, aside from the one time I took a rental car to go thrift shopping with some friends, most of my life has been confined to Hanover. Though that's all changed now that I've moved off campus to West Lebanon (or West Leb).

The thing is, as far as I can tell, my situation is pretty atypical. I'm currently living in a place called Sachem Village, which is usually graduate student housing. And that's made even more apparent by the fact that I am currently living with two PhD candidates.

And, I'll admit. When I first heard last Winter that I'd be subletting a room from them, I was a bit nervous. After all, I wasn't sure that we'd be able to get along given that I was just an undergraduate. But that wasn't the case, really at all! Turns out that one of my roommates, a Molecular Cell Biology (MCB) PhD candidate, happened to do a rotation at the lab I currently do research in, and my other roommate, an engineering PhD candidate, loves to talk about cooking with me. Unfortunately, out of respect for their privacy, I don't have any photos of that.

Picnic on the Green with a couple friends! They also live off campus
But I'll hope you take my word for it that this really reaffirms how tight-knit the Dartmouth community. We often hear about how everyone's friendly to each other, but those people are mostly talking about undergraduates. Occasionally, we'll talk about faculty-student relationships too, but never about graduate student-undergraduates. It's easy to think that graduate students would be dismissive of us undergrads. After all, we have decidedly less degrees than them. But, the fact that my roommates have not only let me live with them, but also take me under their wing? I can't really express how much I appreciate it. In fact, once my MCB roommate heard I don't have a car, just a bike, he started taking me grocery shopping now on the weekend! It blows me away that he takes time out of his weekend to do that for me, and I can't express how much I appreciate it.

Regardless, just because I'm off campus doesn't mean I'm disconnected from the rest of my undergraduate friends. I still have on campus access, so I still go on picnics on the Green with my friends, study in Baker, and go to the gym. But, living off campus with my graduate student roommates has given me a new perspective, not just on seeing firsthand what it's like to live as a graduate student, since that might be in my future too, but also how everyone in Dartmouth, even graduate students, takes care of each other.