So, apparently I'm a model now.

It's not what you think. Though it's kinda cool that I can *technically* say that.

Basically, one of my good friends is a prospective studio art major who is currently taking Sculpture 1. According to her, it's pretty demanding in terms of workload, but still one of her most enjoyable courses.

Part of what makes the class so demanding is that for each sculpture she creates, she needs to have a "digital component" to accompany it. And, for her artistic vision, she needed a model.

That's where I came in.

It was about 10 PM on a Tuesday night when my phone buzzed with a cryptic text reading:

Having nothing better to do, I decided "Eh, why not. Let's see where this goes."

I show up, and long story short, I spent an hour or two wearing a bedsheet pretending to be a "blank, human pillow." 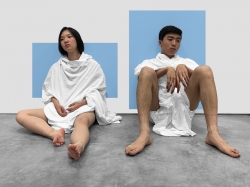 Me pretending to be a "human pillow," whatever that means

I thought that would have marked the end of my modeling career, until about a couple weeks later I got another text:

"Nick, come to BVAC again. Wear a black turtleneck. I need you to try on the 'Smiile Box.'"

Now, the 'Smiile Box' was another one of her various machinations. The best way to describe it is a massive, wearable post-modern wooden box with a lifeless painted smiley face. You put it on your shoulders and, when you speak, you're blinded by rows upon rows of sound-activated LEDs.

So, one trip to BVAC, a couple hours, and numerous disorienting LED flashes later, thus ended my second modeling endeavor. 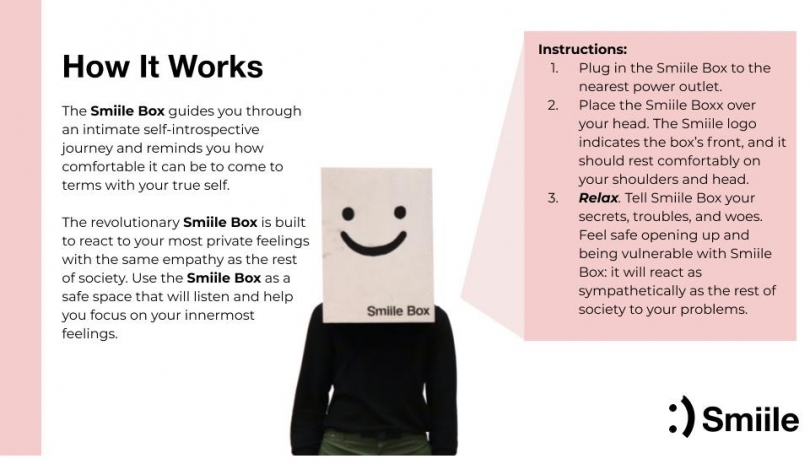 A mock infographic for the "Smiile Box" starring me

A funny little outtake from when we shot the "Smiile Box"
The reason I tell this story is to pretty much show that Dartmouth is somewhat of a "nerd sanctuary"— a place where people can do whatever and explore whatever passion they want. And if I'm being honest with you? I love that about this school. There's gotta be a reason why I spent all those late hours at BVAC with my friend because, let's face it, I'm clearly not getting paid for this. Rather, it's because it's comforting to be surrounded by people who genuinely put passion into their projects. Not just art too. I have friends working on social impact, scientific research, etc. for no other reason than they genuinely want to. It's comforting, really. That wasn't something I could really get in high school.

There's something about being surrounded by that that's freeing— if everyone is open and free about doing what they love, well, it kinda makes you wanna do the same.

Coming Back to Campus to Snowball Fights and Friends

I am now settling into campus life again. And what better way to do this than attending the famous snowball fight?

Did someone say "Winterim"?

Happy New Year everyone! Welcome back to another episode of 'Adrian's adventures'. I'm your host Adrian. In this episode, I will be giving you a recap of my winter break (winterim). So sit back, and enjoy the show.

Winter is here! Here are some survival tips and ways you can embrace the season!