Student a cappella and dance groups are a staple of Dartmouth culture. They perform at frat shows, the Hopkins Center, various school-sponsored events, and even travel to other cities together to perform or go to conventions and take classes. I personally dance quite a lot on campus and can tell you almost everything you need to know! 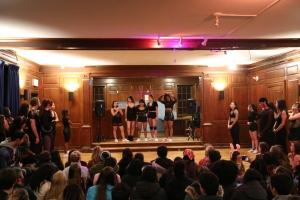 Many dance groups perform at frats during the term; here is what a typical dance show looks like.

There are a couple of dance groups on campus, some which hold auditions and others which are open to campus. The four dance groups (two more contemporary and two urban/hip hop) which require auditions hold them together the first Sunday of fall term; this year, there were forty students auditioning. With the day starting early in the morning, everyone is broken up into smaller sections and rotates through all four dance groups. During this first round, you learn choreo taught by dancers of that particular dance group; yes, if you are a freshman, you are required to audition for every single one. Though it is a big time commitment and can seem like a waste of time, this rule makes it so that all students are pushed to audition for groups they would have passed up.

After the first round, there is a small break for deliberations. Dance groups can choose to call you back for the second round, which consists of 2 solos. Some people did improv, others repeated the same dance twice, and still others did two dances to show versatility. Round 2 is really important in showing your personality and potential! After some more deliberation, dancers are called back for Round 3, which is some more choreography. The first round is the only one in which you have to dance four times: after that, it depends on how many groups call you back. Round 3 is limited to two groups, after which you "pref" your top choice and wait for the decisions. 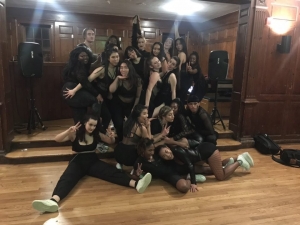 Me and my dance group after our Valentine's show this term!

Our auditions ended around 9PM or so, and I was introduced to my dance group around midnight that very day. In all cases, you will learn of the results 24 hours after the audition. Most dance (and a cappella) groups rehearse three times a week for two hours each time, with more time during show weeks. There are a lot of opportunities to perform and it is really fun to dance for a rambunctious Dartmouth crowd and the support of your friends. Outside of student performance groups, you can also dance for musicals put on by the theater department, with Dartmouth Dance Ensemble, and for things such as Trips (you'll know once you get here).

One caveat is that while there are hip hop and contemporary/jazz groups, there currently isn't any ballet presence on campus, which is something I personally really miss. Nonetheless, I highly encourage every student to try dancing sometime while they're here, simply because it's a fun way to meet other people, get your body moving, and forget about your academic stress for awhile. If you ever have any other questions about dancing at Dartmouth, don't hesitate to ask!

The Arts at Dartmouth – and having fun consuming them!

The Arts at Dartmouth are awesome! We have all sorts going on around campus from dance shows to concerts – here are my experiences with them!

An ode to my theatre teachers!

Theatre has been present in my life for s long as I can remember. So here is a shoutout to the professors who made me feel at home on the stage!

The liberal arts system allows for a lot of freedoms – especially at Dartmouth! Here is how I've been taking advantage of that this term.

Even though there is still plenty of time for me to decide upon my major, I have known for years that I wanted to major in music. However, you're probably thinking, "Hmm going to Dartmouth for music? That's weird." And yes! Yes, it is!