Lessons Learned Along the Way

Exactly a year from the early December day that I'm writing this post, I'm in the beautiful town of Myrtle Beach I call home with more time on my hands than I had the ability to imagine while on campus. In the shift from action-packed college life to the pervasive quiet of suburbia, I've started to think about how much I've learned about what I'm interested in academically, what study strategies work for me, and how much of a gamechanger an omelet in the morning is for my mental health. Spoiler: a big one.

As you probably know by this point if you've been reading my blogs, I took an Introduction to Linguistics class that was based on how much I loved languages in high school and really for my entire life. During this class, I learned how to use the International Phonetic Alphabet (IPA), and now as I'm looking up languages, I can figure out native speaker pronunciations for certain words simply by using this handy-dandy linguistic tool. It's been really fun showing my friends their names in this alphabet and equally as fun telling my sister that Hawaiian vowels are *extra special* and she needs to makehermouthmoreofacirclebecausethelanguagedemandsit.

But in seriousness, I'm hooked on linguistics. You will be seeing much more linguistics-related experiences as I take classes, learn cool stuff, and even embark on self-imposed research adventures (more on this later).

As far as studying goes, one of the biggest things I've noticed about the transition to college revolves around strong study habits. All of my friends with really strong self-discipline and the ability to exile themselves into the library for independent studying had a really fun first term, but some of my friends that pick up their phone every five minutes or love to procrastinate sometimes felt a little rushed or stressed out. It's all about having strong habits and an even stronger ability to turn your phone off. And maybe picking up chocolate-covered espresso beans from Novack.

A bigger lesson I've learned in the scramble to study is that who you keep around (and when) is so important. I know some of my friends are the perfect study partners and that others will pull me into an impromptu Netflix movie that I may not have the time for. Being able to consolidate some really cool people to be your companions on 4th Floor Berry (4FB in Dartmouth lingo aka the place I go when it's time to really crack down on a paper) is instrumental to ensuring your academic success. For others, maybe studying in your room with your earbuds in and lo-fi study beats playing is the actual recipe for success and doesn't call for other people. That works too! 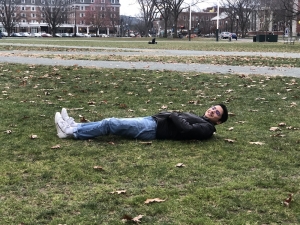 This was taken during a scheduled study break in the middle of a 4FB grind session. Hubert loves grass.

I mentioned an omelet in this post's introduction and I stand by how influential the morning is to jumpstarting your day. When you're able to get up at a reasonable time — me being a morning person meaning 7 am (which is unthinkably early to approximately 98% of my friends on-campus) — you can really influence your own productivity and ability to take on the day with energy and vigor. Dartmouth being on the quarter system, time moves fast. Every day is a time for new lessons, new people, and new twists and turns. Having the foundation of good habits went so far in allowing me to take the classes I took while also doing extra writing and a handful of activities on the side.

And when you're stressed out, sometimes baking cookies with your friends (as seen in the featured picture for this post) is the way to go. We recommend homemade snickerdoodles - they hit different.

This is a post for my blog but also a letter to my future self so that I can remember the strategies I used to make my first term at Dartmouth a successful one. I think I've had an amazing time so far and can't wait to offer more and more of my Dartmouth journey to you all over the year.