Being in the Upper Valley gives Dartmouth a front-row seat to some really cool different academic phenomena. For instance, the work I've been doing and the research I've been conducting in my Experimental Phonetics class over this term is much like the research my professor conducted from Dartmouth on New England English, being informed by his experience. In fact, I've come to realize that the curriculum itself has been advised in some small part by the experiences of the student that research this dialect of the English language with my professor. 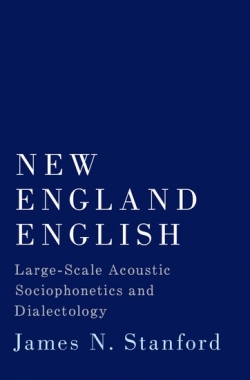 Written by our very own Professor Stanford, acting Linguistics chair!

Because Dartmouth is where it is, my professor could study the iconic New England English of Good Will Hunting. And that's for linguistics. The experimental potential for prospective environmental scientists and scientists in general is massive, and I've already had upperclassmen friends tell me about how in their STEM classes, they go outside — because that's where the research is done.

As you can see in the picture that led this post, and which you may or may not know already, I voted in the New Hampshire primary. As one of the first in the nation, this puts Dartmouth in an incredible spot to advise and partake in presidential elections. But did you know that I've already seen or heard about dozens of research projects that use this opportunity to make some sense of political science? Again, Dartmouth is utilizing this geographic blessing we have in lovely Hanover to foster a unique academic environment like no other.

But one of the most intriguing and beautiful aspects of Dartmouth's location in academia that I've found is in the Native American Studies program. For instance, in my Indigistory class, we looked at contemporary methods of Indigenous literature — representation, artistic mediums, and how the 21st century has given Indigenous narratives new life. My professor spent a sizeable amount of classtime looking at ways that the Abenaki tribe has used the media for telling stories, specifically at creation myths, and one of my classmates, as a final project, interviewed the chief of the local Abenaki tribe about his time in the United States military in order to shed more light on Native veterans. The Abenaki are the traditional inhabitants of New Hampshire and the Upper Valley, so being able to actively engage with the Abenaki people in our academic contexts provides a specific method of simultaneous representation and support. In a class a few of my friends took in the fall, traveling to events held by tribes around the Upper Valley helped to show traditional ceremonies and community feasts as additional ways to respect and honor traditional Indigenous ties to the land, which wouldn't be possible without Dartmouth's location. If we're going to be on Native land, we should honor that, and the Native American Studies program does an incredible job of making that happen in specifically academic contexts for the student body to engage with.

And yeah, you could say that I'm being nostalgic again for Hanover...you'd be very much correct. See you all again very soon.

I'd like to talk a little bit about exploring your future career and the opportunities Dartmouth offers to guide you. What should you get involved in your first year? Let's use my first year as a case study!

What I Miss About Dartmouth

I am writing this blog post as I enter the third week of my internship at Breakthrough SJC.