A Protestant walks into a Catholic student center....

Coming to Dartmouth, I knew I wanted to be involved in the Christian community as a student. And every year, there's been something that I've done at Dartmouth that's helped ground my faith. In my junior year, it has been Dartmouth's Catholic student center called Aquinas House. Located at the end of frat row, the large building contains two libraries, a game room, a movie room, a kitchen, and a chapel, all of which are open 24/7. Founded in 1953, Aquinas House has been a spiritual center for generations of Dartmouth students. You will often find me in one of the libraries doing my work, or on one of the couches in the movie room, coming dangerously close to falling asleep on them. 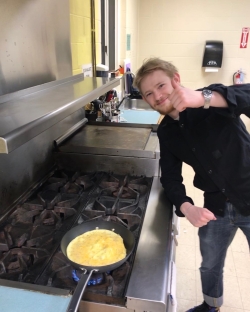 Aquinas House has helped grow my faith intensely. With a 24/7 chapel, I have a space to pray and reflect, helping me become closer to God, even at two A.M. Not only that, but Aquinas House has a chaplain who lives in the rectory attached to the center, a Dominican Friar named Father Timothy Danaher, O.P (fun fact, he is actually a part of a band of other Dominican Friars, called the Hillbilly Thomists!). He is a constant presence in the Aquinas House community, whether by answering various theological questions to students, providing pastoral care, or simply playing on the Aquinas House intramural softball team. Even as someone who is not Catholic but is Protestant, Father Tim as well as campus minister Corrine have made me felt welcomed in the center.

A palm leaf cross I made during Aquinas House's Palm Sunday service!

There are various events open to the campus, including the popular community dinners on Monday nights. Delicious meals are cooked by students and can range from quesadillas to teriyaki chicken. This week, along with the many students, about a dozen of first-year priests in training came and ate and conversed with us. The event was a success, and many stomachs were happily filled with homemade food.  Not only that, but Aquinas House occasionally brings speakers to campus. A couple of weeks ago, Aquinas House brought in Father Gabriel Torretta, O.P, a Ph.D. candidate at UChicago looking at the theology of beauty, which was the topic of his insightful speech.

Overall, Aquinas House is an amazing place for the faithful, regardless of what denomination they identify with. I've found a great community in this space, and I hope you can as well!

Plot twist: I didn't want to go to a school with cold weather. Here's how I've been pleasantly surprised by Dartmouth's winter so far!

Being Christian at Dartmouth!

I realised many of my posts relate to different parts of my identity: being multiracial, being Latino, being queer, and much more. But here, I seem to have never talked about being Christian!

My Experience and Take on Greek Life

I wanted to let you in on my Greek life experience and give you my take on making friends and connections without it.