Sleep is for the Weak (Just Kidding. Sleep is Important. Stay Healthy, Kids!)

College is a time to make mistakes. Free from home, and with no one telling you what to do, you start to realize that the things that you previously couldn't do were because you really shouldn't. Like what I did this past Friday night: the Lou's Challenge.

The Lou's Challenge is kind of a Dartmouth tradition, but the more apt term for it—I feel—is that it's a dare. Basically, you're supposed to stay up all night (studying doesn't count), and then go to the local Lou's Diner once it opens (7:00am). And so, to celebrate the end of midterms, my friends and I decided to go for it. 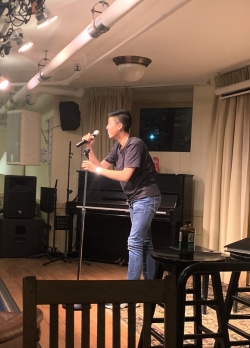 Me performing stand up comedy. It was tons of fun! I'll talk about it another time.
The night started off quite fun, actually. My friends came to One Wheelock (Dartmouth's free coffee shop. Yeah. You heard me. Free coffee shop) and watched me perform stand-up comedy for the first time (more on that in another blog post). Afterwards, we went to the Collis Market (Dartmouth's on-campus convenience store) and bought a bunch of snacks. It was as we were scanning our various packs of ramen, chips, and pretzels that someone said "Hey, wanna do the Lou's Challenge?"

Despite my protests, we decided to do it. 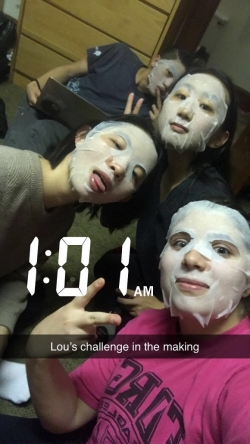 My friends and I using face masks! For whatever reason, Dartmouth's Wellness Center stocks up on Korean face masks, and gives them out for free. Wild.
The night started off pretty strong. We put on face masks, free from Dartmouth's Wellness Center (there's a lot of free stuff here), and just talked. About anything and everything, no topics barred. Somehow, that made its way to watching a really, really bad TV show called Love Island until sunrise. For those of you who don't know what Love Island is, as I initially was, it's a reality show about a bunch of single people who are dumped onto a remote island, and need to "couple up" or be booted off the island. It's as bad, if not somehow even worse than it sounds. 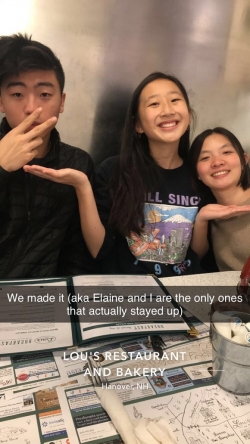 My friends and I after the challenge. My bedhead is much more evident in the thumbnail photo, but here my eyes correctly convey my sleepiness (midterms were last week, so let's just say that I wasn't getting much rest).
And yet, somehow my friends (and admittedly I) got really invested into it. We somehow didn't wake our neighbors, but our viewing session eventually devolved into our group of four quiet-yelling at the TV until sunrise.

I wish I could say that at the end of the night, I stood triumphantly with my sleepless friends, but I can't. As ashamed as I am to say it, I passed out at 2:30. Though in my defense, so did my other friend.

I was shamefully woken up at 6:45, where my friends and I headed to Lou's and had our (for some) victory breakfast. But, we did not look like winners; I had pretty bad bedhead (as seen in the photo), and my friends' faces looked… tired to say the least. We actually saw another group at the diner who also decided to do the Lou's challenge, which led to a conversation where we all agreed upon two things: that we were very tired, and that we are never doing this again.

Last week was week 8 of spring term at Dartmouth, which means only one thing: Green Key!