Here I was, casually sitting on a Tuesday afternoon right after my Bio 13 midterm. A wave of relief washed over me, and I was honestly ready to nap for the rest of the afternoon. Before I could indulge myself in a few extra hours of sleep, I received an email with the subject line reading: "Would you, could you, in the snow?" Intrigued and excited, I opened the rest of the email, and it read:

That's right, we were invited to a campus-wide snowball fight! It is a Dartmouth tradition to host a snowball fight at midnight during the first significant snowfall. I had an inkling that this moment was near, especially after I had walked through snow that was up to my knees while trying to get to our dining hall. My excitement got the best of me, and I eagerly waited for the clock to strike 12.

I put on extra layers of socks, tied my snow boots, wore my extra warm gloves, and waited by the entrance of the Green for the event to begin. I, an eager '24, had been awaiting this moment since the beginning of winter term. I, an eager '24, was ready to throw snow rapidly at random individuals. I, an eager '24, forgot that I was 5'2 and when it hit 12 o'clock, was pummeled with snow thanks to my friends.

All I could see around me were flying balls of snow, students trapped in the snow, and foggy glasses. I heard screams, laughs, and hilarious, friendly trash talking. This was a beautiful moment where I felt a true connection with the Dartmouth community. It's traditions like these that make me feel lucky that I chose the right campus to be on. Yes, we had work and classes the next day. But, for one night, the students forgot about their stress and had some fun in the snow. What's better than that? 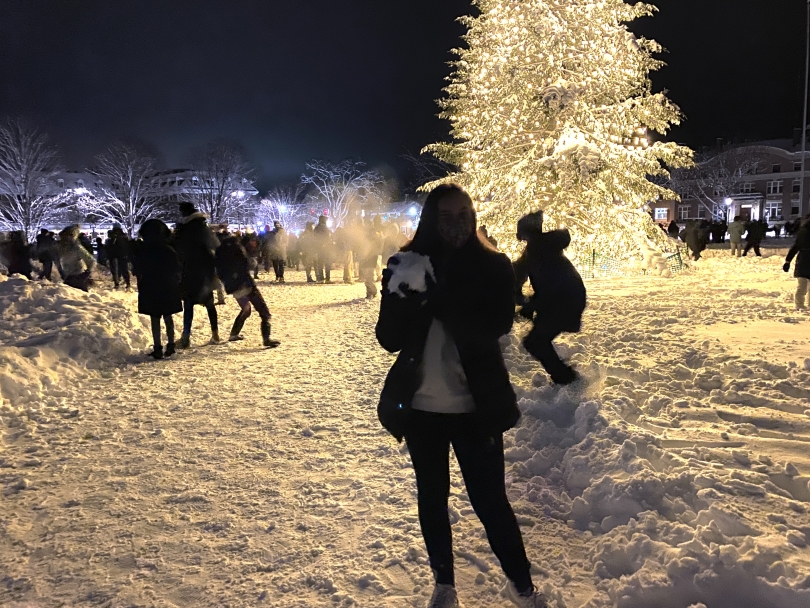