Hiking with My Lab - Part 2

I'm not one for the outdoors. I mean, I'm not particularly against it, but it definitely does make my choice of Dartmouth a bit more on the strange side.

There's no way around it. Dartmouth is very much an outdoorsy school. The Dartmouth Outing Club is easily the largest on campus, and covers everything from fishing to a 50 mile hike. Which, as fun as it sounds, is something I'll never do. Nothing against it, it's just not really my thing. 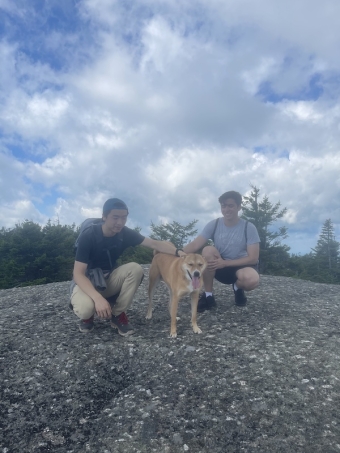 Me, another undergrad, and my PI's dog! For some reason, hiking is more fun with dogs. Can't quite put my finger as to why

However, I recently went on my second ever hike (not counting my first year trip). And, like the first time, it was with my science lab. On campus, I'm really into research, and I've spent the past three years doing computational biology work with Xiaofeng Wang. I'm really lucky to have found a lab that has been so supportive of me even though I'm just an undergraduate, and I'm fortunate enough that I have a chance to do a senior fellowship with them this year. But that's another blog post for a different time.

Rather, I've talked before about the idea that research at Dartmouth is its own form of community. Aside from hikes, I've also cooked hotpot, attended conferences, and gone on academic retreats with my lab. Don't get me wrong, work comes first, but at my lab and others that I've seen at Dartmouth it's more than just that.

Last time my lab and I hiked up Mt. Lafayette, which is one of the tallest mountains in New Hampshire. This time we hiked up Mt. Cardigan, which although still sizable at 3,155 feet tall, is nowhere near as close as the 5,000+ feet of Mt. Lafayette. I was with my my PI (principal investigator, or professor who's in charge of the lab), a grad student, two research assistants, a rotation student, and another undergrad like me. Oh yeah, and two dogs. 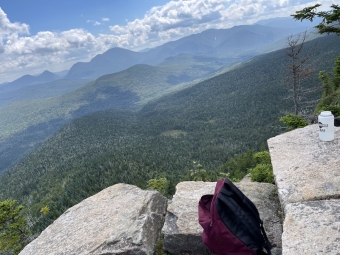 Don't get me wrong though. The view was still pretty dope.

Unlike Mt. Cardigan, we actually got to chat during the hike, instead of the panting and sweating of the last one. And, I don't know what I expected, but it was all about science. Both our own research, and even random science findings that make the news, like a study someone found about how instant noodles are digested in your stomach. I've long since forgotten the view, but that memory has stuck with me.

And that's the thing about all this, and why I found the hike so enjoyable. I've been on quite a few hikes by now (three, but that's enough for me). I mean, I guess they're cool, but at this point it's pretty evident that it's not my thing, even if I'm at Dartmouth. But, I'll probably still go on them because I find spending time with people as passionate as I am, so far as to spend their "rest days" discussing science in the middle of the woods simply for no other reason than because they just like it.