Are You Ready for a Winter Rumble?

Back home, the seasons go like this: summer, summer, summer, and-you guessed it-summer! Growing up in Louisiana, I'm used to the heat, so the winter's a little new for me. But at Dartmouth, during my first winter, I've been learning how to enjoy the cold!

For West House, winter means playing or cheering for our dorm-mates in intramural ice hockey! And at said event, I spent my first-ever ice hockey game cheering on West House friends! 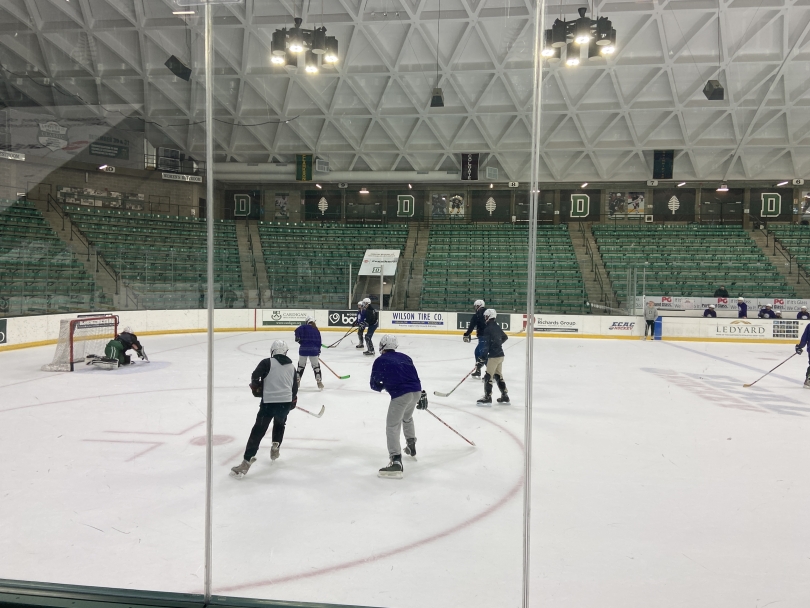 But what is all this intramural House stuff anyway?

Dartmouth has six house communities: West, School, East Wheelock, Allen, North Park, and South. Each term, members of any house can form an intramural group and sign up for an intramural team. Students can be seasoned athletes and play just to keep up their skills, or they can be rookies venturing out to try a sport they've never played. Players come out to practice their sport, have fun and make connections with other students in the game. Spectators (like me!) can also join in the fun by cheering from the stands or shooting the death glare when the opposing team gets too close to the goal.

It's really cool to see friends on our "home"-team wobble shakily on their skates at first, then begin stealing the puck from the opposing team, and end up taking home the highly coveted… bragging rights! after winning a game!!! West House won the last hockey game against a frat 4-0! Yes it's true, the frat bros occasionally lose to freshmen! But by the end, no matter who wins or loses, bonds are made and communities are strengthened.

While I'd say Intramural hockey is totallyyy the main event, Dartmouth has a club team and D-1 team, too! Every weekend, they've been facing off with the other Ivies, working up to the biggest and last home game: Dartmouth vs. Princeton. In an ultimate showdown, Dartmouth ended up scoring in the last minute and a half of the game, and to celebrate the first goal of the Dartmouth-Princeton game, as is tradition, we threw tennis balls onto the ice! I'm also left wondering where exactly the tradition came from, but I'm not complaining—it was loads of fun!!

Last week was week 8 of spring term at Dartmouth, which means only one thing: Green Key!