It's odd, actually. Two terms in, currently on my third, and I have yet to write a single post about my classes. Now that I am currently trapped in the house because of the… recent events…I've only just now realized how much I really miss being on campus taking classes. Even in a (relatively) large class like chemistry, there's always some way to create community. Don't believe me? The below photo was taken to "celebrate" the end of the laboratory portion of my general chemistry (Chem 5) course: 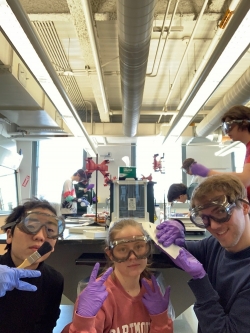 I'll admit, courses at Dartmouth aren't for everyone. They're tough, demanding, other synonyms for challenging, you get the idea. What's unique about Dartmouth is that each term we only take three classes per ten-week term. Most schools take more classes over longer periods. But in all honesty, I actually prefer this about Dartmouth. With this pacing, we can go deep, and we can go fast. And with this comes a broad variety of classes that you can't really get outside of a liberal arts experience. Now, I've said time and time again (even at the top of this webpage) that I'm a prospective Biomedical Engineering and English double major. But since coming here, I've taken "God and Money" (a class about the intersection of religion and economics) "The Pursuit of Happiness," and simply "Joan of Arc." Yeah. A 10 week deep dive dedicated to a single historical figure. At the high school I'm from, that's just unheard of. 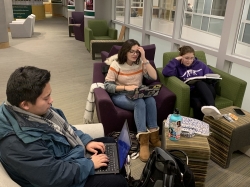 The benefit of spending so much time in the library studying? Impromptu study groups!

Were they hard classes? Yeah, of course. At Dartmouth, I'm the most academically challenged I've ever been in my life. But I don't think I've ever been as fulfilled as I am now. There's an odd sort of freedom with the liberal arts system. I'm a massive hip-hop head, so for the final paper for "God and Money," I wrote a paper analyzing the religious and economic backbones underpinning Kendrick Lamar's song "How Much a Dollar Cost." And, as a huge fan of stand-up, for "The Pursuit of Happiness," I studied the "sad clown paradox" stereotype by researching whether or not professional comedians were happier people. Was it a ton of work? Yeah. But the freedom this kind of academic system brings gives you a sort of creativity that makes it all worth it.

There's also just straight up creative classes too. My favorite course last term was "Writing for Television," a creative writing workshop dedicated to writing an original TV pilot. As someone who's obviously into writing, I was immensely grateful for this kind of opportunity. 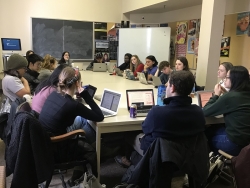 My Writing for Television class! A nice, creative outlet to balance out the beautifully hectic terms here

Overall, as I sit here, Spring term, Zoom class over Zoom class, I find myself missing being back on campus. Now don't get me wrong, Dartmouth is doing a surprisingly good job managing this whole remote learning. It's a strange time for everyone, and we're all just trying to stay afloat. But there really isn't anything that can replace just being present on a physical campus, and definitely nothing that can replace Dartmouth.