First-year trips is an integral part of the Dartmouth orientation experience. You may have read about it on our website, or maybe this is the first time you've ever heard of it! Either way, I want to share what made mine such an AWESOME experience (and why my trippees were the best of course <3). First-year trips can honestly look from afar as if it is just another college orientation program, but first year trips is one of the most meaningful experiences I have ever had in my life. I made amazing bonds with some of the best and most kind people I have ever met and got to get a taste of what everyone is talking about when they mention the community here at Dartmouth. Alongside that, I also got to do some pretty kickass exciting things!

We began life as trippees (trip members) on the Dartmouth green. Surrounded by incoherent and chaotic screaming from the upperclassmen trip leaders, we stumbled along the green to our sign – A48. Amidst the chaos stood two crazy-looking upperclassmen donning camo-print bandannas and cheering: I immediately knew I liked these people. Slowly but surely my fellow trippees also trickled down to where we were and I got to meet them, one by one. It feels weird to think back to this now because back then we were all just strangers and seemed completely different from each other, but that was only going to change for the better. I noted first the range of places we were from – I was the only international, but we had people ranging everywhere from New Hampshire itself, to Colorado and California! This merging of cultures and places is one of my favorite things about campus - you'll get the chance to meet people from all over the world and gain a huge range of perspectives on life.

My awesome trippees and me styling it out at Gile!

Our first outing as trippees was to Foco ('53 commons) where we grabbed dinner and sat on the green chatting. Here I began to get to know my trippees a bit better – we had skiers, a cross country runner, and even a Mario Kart Wii champion! (An impressive accolade). Alas, we all went back to our dorms before heading out the next day on our first and most intense adventure – hiking North Kinsman, a mountain with 3200 ft of elevation on a trail that was about 12 miles. We were on the most strenuous hiking trip, but things had been changed this year with COVID and other challenges, so instead of 3 days of hiking, we had a hiking day, a Hanover day, and a lodge day! This may seem on paper like a downgrade, but it was actually even better than hiking would have been!

The hike was AMAZING. I had never really hiked a mountain before and so the physical challenge was awesome, but that mixed with the beautiful views of the Upper Valley and the interesting conversations we carried on the way honestly made it an unforgettable experience. The rocks made things insanely hard, and at many points I was exhausted beyond belief, but our trip leaders made things easier by ensuring regular water breaks. A large point of conversation on the way up was my accent and the way I said things differently than an American (hot tip: having a foreign accent is an amazing icebreaker/party-trick), and I slowly began the British conversation of my peers as I taught them British slang and language. We eventually reached the peak however only to discover we had been fogged out! Luckily for me though I'd never been so high up and in the clouds, so the immense sea of white foam was just as impressive to me as any view (and made for some awesome photos for social media I can't lie). The way back down was a relief – we had eaten all of the food we brought, and gravity did a lot of the work. That didn't prevent my knees from dying though, cushioning the blow as you go down a mountain never gets easier. On the way down we spoke on many topics, from physics to the cultural differences between the US and UK, and even about the horrific fact I had never had a PB&J sandwich! This of course meant I tried – and loved – a PB&J. 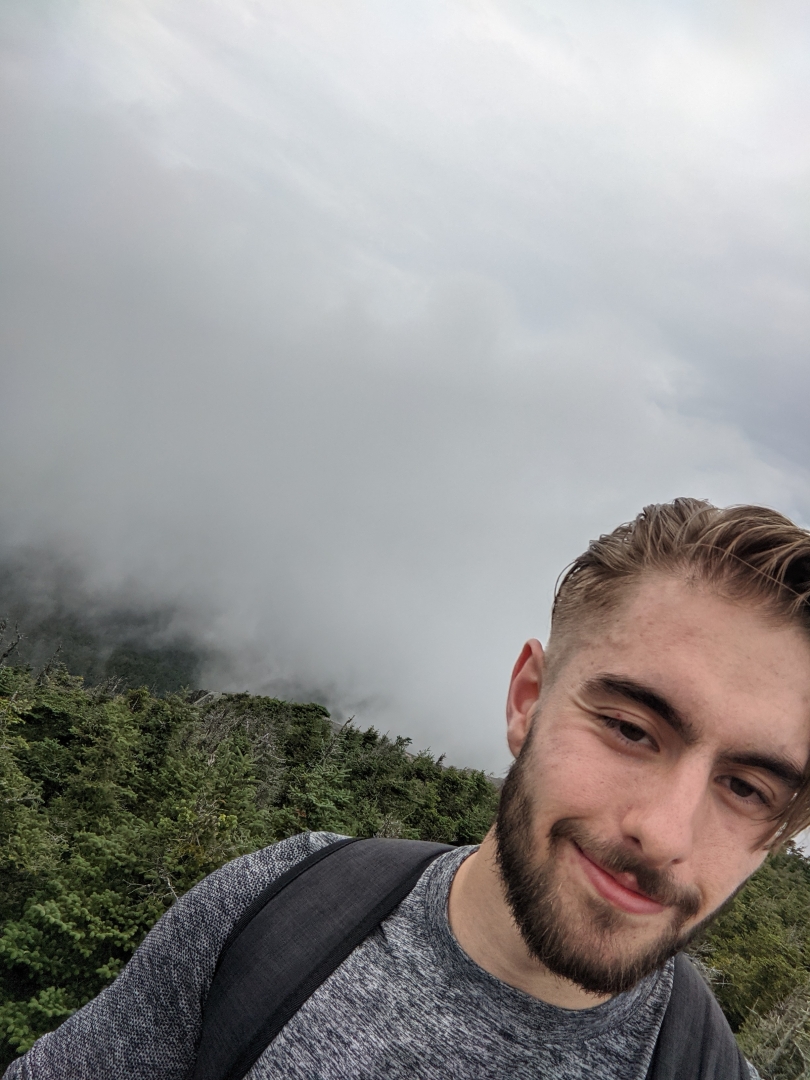 I was standing proud and exhausted after the beautiful hike up North Kinsman!

The day after was our Hanover day, after some events I cannot disclose due to the sacredness of trips… we decided to first have a Wii tournament in one of the trippees' rooms! We first played Mario Kart (which I kinda suck at), but then played Wii sport resort and I won the ping pong tournament! We then went paddle boarding which was new to me, and I must say if you ever get the chance on campus, there is nothing more relaxing than heading to Ledyard docks and renting a paddleboard. To cap off the day, we headed to the golf course for Mac N Cheese (very American of course) and had a huge dance party. It was at this point – at around 23:00 I must add – we decided to go on a Sunrike! (A sunrise hike). We therefore woke up at 4:30 AM the next day and hiked up Gile (a fire tower hike right near campus). It was totally worth it. The sunrise peeking over the mountains was one of the most beautiful sights I have ever seen, and it is a memory that shall remain with me forever. 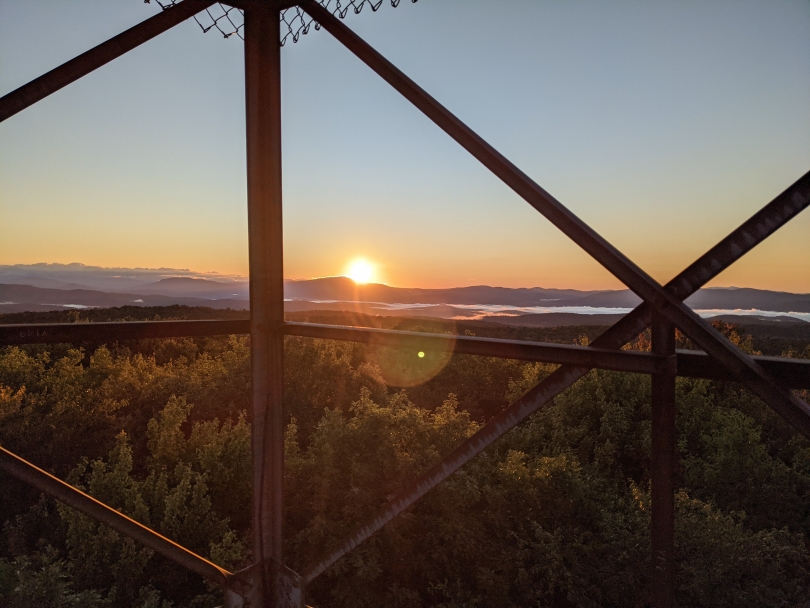 The sunrise at Gile made the lack of sleep totally worth it.

The final day was the one that to be honest I was least excited for but happened to be my favourite. We went to the Ski lodge (Sklodge), and H-Croo were cranking things up by screaming and jumping around in brightly coloured clothes. We quite literally spent the entire day dancing and playing sports (myself managing to find a customary hike to do of course), and it was such an energetic and fun day that I won't forget. We finished the day by watching a traditional film at Dartmouth – Schlitz on Mount Washington – and sat in our groups having deep and meaningful discussions.

Our trip being served an awesome meal at the Sklodge!

I honestly went into trips kind of deflated that we weren't going for a full three days of hiking, but as cringe as I am aware that this sounds, trips is about way more than what activity you are doing – it is about the people you are with and the bonds you form. By the end of trips, I had found a whole group of people that in three days had gone from complete strangers to people I trust beyond belief. You won't necessarily hang around with these people all of the time after trips, but you'll never forget them. Trips embody everything Dartmouth stands for and all of the reasons I applied – it fosters a sense of community, love, adventure, and of course: a profound sense of place.