Hey! I'm Eva, a '25 from the suburbs of New York. Though pursuing engineering, I'm passionate about combining my interests in public policy, medicine, and art within my studies. When I'm not working on problem sets at Baker Library, you can find me playing guitar with my floormates, scouring the internet for local concerts, or utilizing nap spots in the Tower Room. I love Dartmouth for being the perfect place for someone with infinite interests and I hope this blog inspires a similar sentiment!

Living in the River

The common room my roommate and I share
I remember how obsessed I was with rooming and dorms when I first got into Dartmouth. I'd constantly peruse the housing website, looking at picture after picture of floor plans, room set ups, and placement on campus. Seeing as it was where I was going to live next year, I was hoping for something that would perfectly accommodate life as a freshman.

Then I finally got the email of where I would be rooming: French Hall, 3 room double.

After that I did 2 things:

Both good and semi-disappointing news followed.

I learned that a 3 room double basically consists of, well, 3 rooms for you and your roomate. A common space with a fridge, microwave, and two desks as well as two single bedrooms on either side of the larger space. To me, that sounded absolutely perfect. I may or may not have gone on a bit of a bragging spree and made all my friends jealous. Being able to have a roommate? And my own space? Nothing sounded better. Now that I'm finally here, I can say that I truly am in love with my rooming situation. As someone who never had their own room growing up, the idea of personal space was foreign to me. Now with my own little bedroom, I can retreat after a long day of socializing and work (given that freshman year involves a LOT of socializing), but also talk and consult with my roommate whenever we're both up to it. 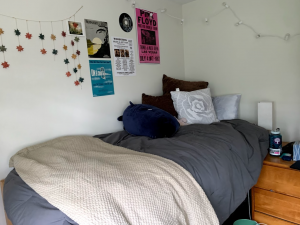 First time I've made my bed since arriving on campus!
But of course all good things have downsides. French Hall is pretty much the furthest thing from everything on campus. The French and Judge dorms are what we Dartmouth students call "The River" because we're some of the closest buildings on campus to the Connecticut river. Time wise, we're a 12 minute walk from the dining hall, 15 from the library, 20 from the gym, and 20 from the life science center. To adapt, most people who live in the river pack everything they need for the day (including gym clothes) and don't return to their dorms until it's time for bed. Personally, I find this to be a great way to go about my day since there are so many awesome study spaces and napping nooks on campus. It's also a great way to get your steps in! Most people in my dorm have a bike as well to make the trek a bit easier. 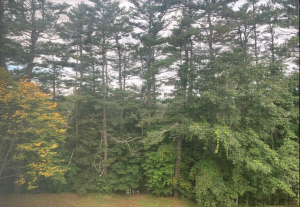 I love waking up to this in the morning. The sunrises are gorgeous
Another thing to mention about the river is that we tend to have a stronger bond than the other freshman dorms on campus. I know just about every person in my entire dorm while my friends in other housing systems don't even know everyone on their floor. Since we're far from the activities on campus during weeknights, we tend to hang out in the common room or just spend time with each other. Things we've done so far include swimming, dorm concerts, poker nights, and WWE stream parties (I'm not the biggest fan but it draws quite a crowd!)

Though we're far from the bigger things on campus, the river is a home I wouldn't trade for any other dorm (though maybe I'll change my mind in the winter). We have the perfect room arrangements, gorgeous views, and a community worth 9,000 steps a day.

An Introvert's Take on Mental Health at Dartmouth

When adapting to a unique college environment, it is important to open yourself up to new perspectives and meet all kinds of wonderful people! Yet, it is even more important to remember your values and what makes you happy.

I reflect on Week 4 and the beauty of Dartmouth's many opportunities and resources. I discuss the amazing memories and bonds that I have created within the Dartmouth and Upper Valley communities!

A rundown of my senior year Homecoming!

With the College being open, I have been able to explore several new study spots to find the best fit!

Throwback to my Junior Summer

I spent my Junior Summer on campus and got to cross off several items on my bucket list!

A Fabulous Foodie Fall Day in My Life

Come along on a fall day with me!

The vast amount of clubs and activities at Dartmouth can be overwhelming at first. Get to know a little bit about my experience with extracurriculars at Dartmouth!

As the leaves begin to turn, fall festivities are around every corner! From Harvest dinner to Homecoming weekend, campus was buzzing with excitement from students, parents, and alumni!

Woohoo! It's Homecoming week here at Dartmouth. While I could focus on the game itself, I want to spend some time writing about the buildup and preparation for the extra special day.