Well, it is that time of the term again where everyone hides in the library for a few days (not really but I guess it is somewhat true)! I currently have two final projects and a paper to write within the next few days, which is honestly a little scary. However, I first had an amazing weekend to celebrate this term before I get started on my finals!

This Hopkins Center hosted a symposium this weekend on Mexican music and the DCWE (Dartmouth College Wind Ensemble) was the central figure in leading the symposium. Our director, Brian Messier, planned and helped organize a weekend filled with events to not only discuss Mexican music and culture, but to perform it and view it! My parents decided to come visit me this time with my grandma to watch the concerts and enjoy the Hanover spring. They ended up attending every concert I had this weekend which totaled to be around five hours of performance.

My view during the DCWE dress rehearsal before the concert

After a busy rehearsal on a Thursday, I performed in a chamber concert where I organized a group to play an uncommon piece of music from a prominent early 20th century composer. Eventually, this concert ended with the world premiere of a drum set concerto from a composer who came up to Dartmouth for the world premiere of two of his compositions. Throughout the weekend, the DCWE members met the composers of all of the pieces we played on Friday night since the concert was filled with four premieres! This concert was probably one of my favorite concert cycles I have ever performed in because it was brand new music that was so fascinating to learn how to play. 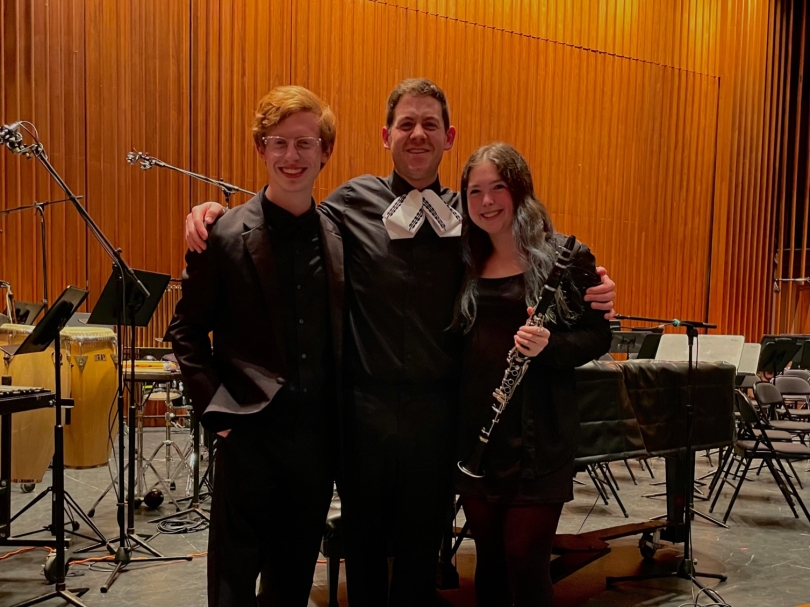 My friend and I taking a picture with our conductor Brian!

After the symposium ended late Friday night, I went to bed since I had a recording session the next day to record these new pieces. Immediately after the recording session, I went to go perform in a concert with the DCO (Dartmouth Chamber Orchestra) to play lots of fun music. It was so nice to perform for my family and friends so much this weekend. After a year of little to none performances, this week finally made me feel like I was a performer again. To celebrate the concerts and the near end of the academic year, my friends and family went to eat dinner out together before my parents left town. Now, it is time to finish my finals and pack up my room to say goodbye to my freshman year. However, I am going to be studying Italian in Rome this summer so there is still plenty more to do!

I just recently elected my courses for the 2023 winter term, let's talk about my choices and why I'm so excited.

Since our first concert of the year just passed, here is my first-year fall experience as a member of the 2022 Dartmouth College Wind Ensemble to any prospective musicians!

Even if you don't have much experience with music or performance, there are plenty of opportunities letting you explore it! I participated in just one of these venues, the Library Concert Series!

My classes this term!

With only about a month left in the term, I decided to reflect a little on the classes I'm currently taking!

A Week in My Life at Dartmouth

Happy end of Week 6! Let me share what I did this week!

Ever Wanted to Learn an Instrument in College?

For free? And a course credit? WHAT? The Individual Instruction Program is a great place to start!

A Journey through English 001!

College is all about trying new things and finding what you are passionate about!