Hello, and welcome to my neck of the woods! My name is Brendilou Armstrong, and I am a '26 hailing from the cornfields and grassy plains of Western Nebraska. This year, I plan to involve myself in Dartmouth's Wind Ensemble, Women in Computer Science, and the Dartmouth QuestBridge Network (as I am an FGLI student who matched to the College on the Hill last December!). I couldn't be more excited to set out on this expedition through college alongside all of you. Thanks for visiting my page!

Music has always been a passion of mine, and after arriving on campus, finding opportunities and extracurriculars to pursue such a passion became one of my biggest priorities. After auditioning and getting accepted into the Dartmouth College Wind Ensemble (DCWE), it quickly became one of my favorite time commitments, and being that our fall concert just passed on November 1st, I wanted to share my first-year fall experience as a member of the 2022 DCWE to any prospective Dartmouth musicians!

The audition process began early in the summer preceding my first year, when sign-ups for audition slots opened in mid- to late-July. For my audition on flute specifically, I was asked to prepare a 4-6 minute solo piece, as well as the chromatic scale and an array of major scales. I was also expected to sight-read a short excerpt on the day of the audition.

On September 12th, the day of the audition, I made my way to the basement of the Hop and waited for my 15-minute slot outside the doors of the Quartet Studio, where Brian Messier (director of the DCWE), Filippo Ciabatti (director of the orchestra), and Marcia Cassidy (string coach) sat in anticipation for the rest of the day's auditions. The audition was quick and not nearly as intimidating as I was expecting. After only two days of waiting for a response, I was notified on September 14th that I had gotten in! With that, I excitedly began preparing for the term's difficult repertoire.

This fall, we performed an amalgamation of Mexican and Latin American pieces, one written and composed especially for the Wind Ensemble and used in accompanying soloist Pacho Flores, a world-renowned Latin American trumpeter. The four pieces ("Kauyumari" by Gabriela Ortiz, "De Juárez a Maximiliano" and "Concierto de Otoño" by Arturo Márquez, and "Cantos y Revuelta" by Pacho Flores), although extremely time-consuming and difficult, were incredibly fun to play. The amount of energy and liveliness in Spaulding Auditorium on the night of November 1st overflowed from every player and audience member; you couldn't stop yourself from dancing in your seat! 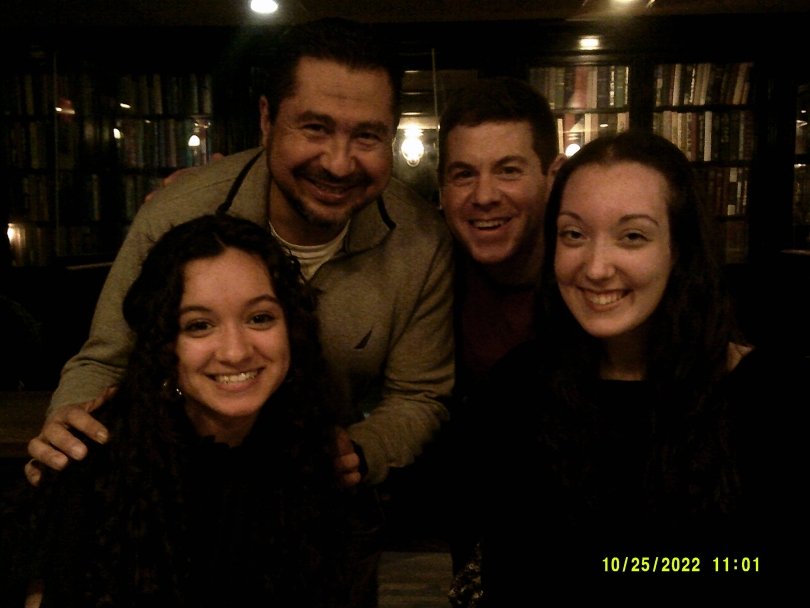 (From top left) Luis Manuel Sánchez, Brian Messier, me, and Julia Spigai (a first-year clarinetist) at Murphy's On The Green Restaurant post-concert!

I am so grateful to have been given the opportunity to play alongside such embellished musicians as Pacho Flores and Héctor Molina, and to be conducted by a director as experienced as Luis Manuel Sánchez. With the end of my first-year fall comes anticipation for next term's DCWE experience, one that I can't wait to document from my hotel room in Mexico City over spring break as we perform there as part of our 2023 Mexico Tour!