Ei! My name is Antônio Jorge Medeiros Batista Silva (yes—four last names!) and I'm a '25 from Governador Valadares, Brazil. My journey to Dartmouth has crossed two continents, three countries, and over 10 schools—and I'm a strong believer that everyone's path to the Big Green was unique in a way. At Dartmouth, I am interested in studying Linguistics, Native American & Indigenous Studies, and Spanish. I am really passionate about social justice, learning languages, and the oxford comma!

It took me a bit of reflection to decide whether I wanted to start this post (my first one!) by saying Hello, Ei, Marhaba, or Ererré - a greeting in Krenak, my family's Indigenous language.

Ever since I got to Dartmouth a couple of weeks ago, I had the chance to meet people who, like me, come from the most unexpected backgrounds and have the most unexpected stories to share. Because of this, introducing myself has started to feel almost like a scripted line I repeat every now and then when I bump into an unknown face. It's like a cake recipe. For my blog, however, I wanted to be sure it feels genuine. So here it goes:

My name is Antônio and I'm originally from Governador Valadares, Minas Gerais - when trying to explain, I usually go with "somewhere between Rio and São Paulo." I play safe just in case the person I'm talking to is not familiar with South American geography. I was born to a half Lebanese mother and to a mixed Native father - but, for the past two years, I've been bouncing back and forth between Canada, Brazil, and Angola. At Dartmouth, I hope to study Linguistics and Theatre. Extracurricular-wise, I am really interested in joining the campus radio and getting involved with the theatre and dance scene. 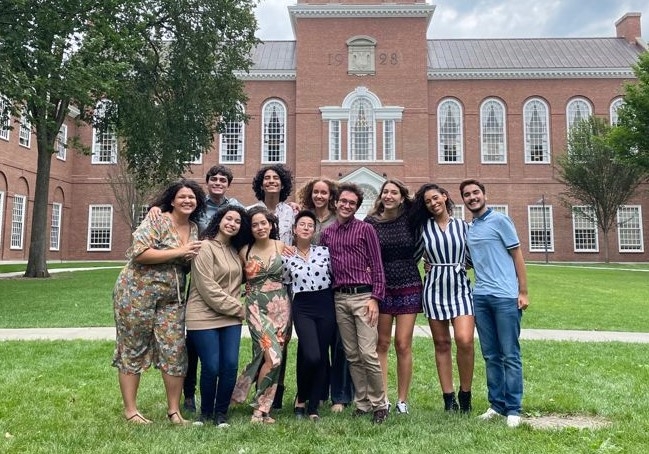 Brazilian class of 2025 in front of the Baker Berry Library

So far, my time on campus has been incredible! I would be lying if I said the College's scenic location was not one of the main reasons I chose to apply here. Although I grew up moving from city to city, I have never been surrounded by such a pretty and unique landscape.

This does not mean my adaptation to Dartmouth's geography has been easy though - and I am not even talking about the fact I get lost every Tuesday leaving my Spanish class!

As a citizen of the tropics, even the sunny days of autumn in Hanover have been forcing me to carry a jacket in my backpack. You might be wondering "why would I purposefully choose such an extremely cold part of the world to live in?" And I am glad to tell you that I have the perfect answer to that question! 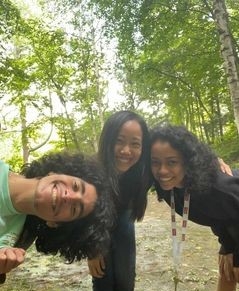 Me and my friends Kate ('25 from Singapore) and Julie ('25 from Mauritius) at Nate's Garden - a super cute place around campus to hang out and chill!

The moment I set foot on campus, I glimpsed at what my next four years at Dartmouth would be like. Dozens of international students disembarking from the same bus - greeting each other and already making their first friends at college; upperclassmen welcoming us and offering to carry our overpacked suitcases to the dorms; ISPOP (International Student Pre-orientation Program) and NSO (New Student Orientation) staff handing out information leaflets and program schedule. I was home.

Now, as I learn to navigate the college - both the campus and its welcoming social scene - I am met with nothing but excitement for my next four years. And, by the way, I hope you will stick around to see what I'll be up to next week.

When Celsius and Fahrenheit read the same value, that's when you know something is wrong. Read on to find out how I survived a weekend of extreme temperature at Dartmouth.

Reflecting on my College Search

Join me as I recap my college search process and why I chose Dartmouth!

It's that time of the term again... Here are my first-year winter classes!