Ei! My name is Antônio Jorge Medeiros Batista Silva (yes—four last names!) and I'm a '25 from Governador Valadares, Brazil. My journey to Dartmouth has crossed two continents, three countries, and over 10 schools—and I'm a strong believer that everyone's path to the Big Green was unique in a way. At Dartmouth, I am interested in studying linguistics, theatre, and Spanish. I am really passionate about social justice, learning languages, and the oxford comma!

At Dartmouth, students have multiple options to choose from when considering extracurriculars. Our campus is such a wide and diverse community that you can always find something interesting to do outside class time. Along with my clubs – the Dartmouth Brazilian Society and the Dartmouth College Radio – I have also discovered new activities to engage with in less formal ways. This term, for example, I had the incredible opportunity to act as the main character for one of my friend's short-films!

In his Intro to Film class (FILM 01), my friend Breno – also from Brazil – had to produce a film of his own. From script to screen, Breno is producing his first fictional narrative. It is a very interesting and meaningful piece, talking about mental health and college life as an international student. Thus, when he asked me to act for it, I could not have been more flattered!

Since the third week of winter term, I have been meeting with him once a week to film a scene at a time. Due to the film's nature, I was the only character through most of the scenes, giving me a lot of work to do! But, with no doubts, it was all worth it. Last week, when we recorded our last scene, I got all emotional thinking of all we had done thus far.

It was interesting to explore ways I could schedule my school work, my involvement in other clubs, and this one extra activity I took on this term. Honestly, I could not be happier with the result. It brought me a lot of joy to expand my knowledge of film production and explore my own acting skills, but it was also super nice to have this break from my usual routine every now and then. 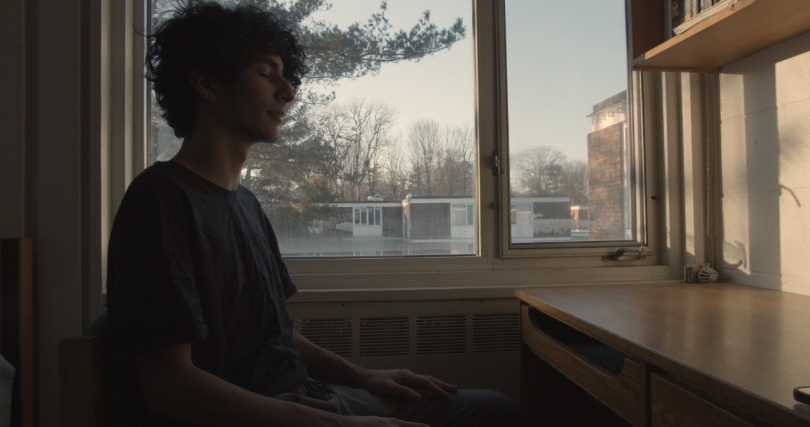 A scene from our film!

Now, as he moves on to edit the piece, I am looking forward to our premiere night. I know this is no Oscars, but it makes really happy to think that, by doing this film, I had both the opportunity to further my experience as an actor and also to get closer to my friend, helping him out with his course work!