Hey! I'm excited to welcome you to my blog page! I'm Andrea Agola, a '26 born in Kenya and raised just outside of D.C. As the eldest child of three, I'm the first to go off to college! I'm glad Dartmouth will enable me to explore a fusion of the sciences and humanities. Don't even get me started on the numerous extracurriculars and opportunities that pique my interest, like the DCSI, research projects and dance groups. Follow along as I navigate this unique college experience!

The magical churros that occasionally appear alongside the Foco cookies.

This weekend my friend and I took a spontaneous day-trip to Boston! We boarded the Dartmouth Coach at 8:40am on Saturday morning and had a great time exploring the city until 9:30pm when we boarded the Coach to arrive back on campus at midnight. On our way to our dorms, we stopped by Foco late night (stay tuned to learn what this is!) for some much needed snacks. Let me slow down though, and give you a better run-down of the eventful day.

After a two and a half hour bus ride of mostly sleeping (the ride was comfyy), my friend and I arrived at Boston South Station just in time for brunch. Just a short walk away, we found one of the best spots according to our preliminary research called Cafe Bonjour. Sure enough, the popular spot was packed so we decided to walk around the neighboring Chinatown as we waited to be seated. The delicious food didn't disappoint and we soon made our way back out into Downtown and the Boston Common Garden. 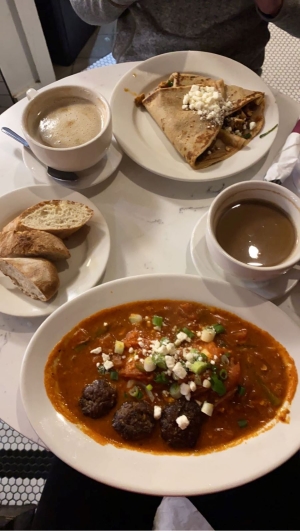 After some time out in the cold we decided to hop onto the MBTA subway. Figuring out Boston's public transportation system was an interesting adventure on its own and it may or may not have taken us 7 minutes to realize we were going inbound instead of outbound once. Our next destination was Prudential Center where we did some shopping and browsing—a little people-watching too since it was nice to see so many people buzzing around. As both my friend and I come from more metropolitan areas, it was a familiar change from the small-town vibe of Hanover that we're now becoming accustomed to.

After exhausting the indoor mall, we walked along the streets of the surrounding Bay Village and were pleasantly surprised with a sprinkling of snow in the afternoon. We stopped for a coffee pick-me-up which gave us time to scope out the dinner options in North End, Boston's little Italy. If you plan a trip, I highly recommend setting reservations in advance because so many restaurants were already booked for the night. We rode the subway again, then looked around a bookstore before getting dinner at Antico Forno where I had the best pesto pizza I've ever had!

Before we knew it, the day was over and we were on the Coach heading back to campus. We made up for the missing popcorn during the movie we watched by heading to Foco late night as soon as we touched down. For the first time this school year, because of the Dartmouth Student Government, Dartmouth Dining Services has returned late night dining at Foco (Class of 1953 Commons Dining Hall) from 9:30pm to 1:30am every day. We reunited with some friends as I ate my favorite snack combo: zucchini fries and Welch's (the best kind!) fruit snacks. All in all, it was a pretty successful day!

Plot twist: I didn't want to go to a school with cold weather. Here's how I've been pleasantly surprised by Dartmouth's winter so far!