Dartmouth Memories, One Year Ago

As I prepare to spend another term remotely, something that I've found myself doing a lot of is sending and receiving Snapchat memories from one year ago. For anyone that isn't familiar with Snapchat, the app shows you saved memories that took place on today's date from however many years ago. Now that it's been a year since my freshman fall, I find myself constantly enjoying short videos of what I was doing this time last year. Although I've blogged about my freshman fall, I thought it would be a good idea to share my favorite Snapchat memories I've looked at so far and give a perspective on my first term at Dartmouth, one year ago. 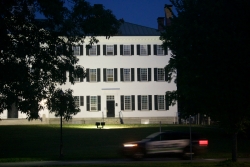 Dartmouth Hall, where I had my French class last Fall

The most common Snapchats I've seen are from weekend celebrations, where my friends and I were first going out to explore what Dartmouth offered at night. Since we were still under the fraternity ban as freshmen, many of us would gather at one designated event that a group (usually a fraternity house) would be hosting just for us. These events were dry and open to everyone, so they were very accessible and honestly a lot of fun. When the ban ended, I appreciated having more weekend options as I got to know more people and groups on campus. However, looking back at my first weekend memories on campus, I miss the immense sense of community I felt as my entire class formed a crowd outside of whichever house was hosting an event that night. Those weekends were when I first realized how welcoming and fun Dartmouth could be, and looking back at those memories only bring smiles to me and my friends.

Another Snapchat memory that I never get tired of is late night, which is a meal period at Dartmouth that happens from around 9pm-2am, depending on if it's a weekday or weekend. As someone who went to a boarding school where the dining halls closed around 8pm, late night has been one of my favorite things about Dartmouth. Not only is there hot food available at late hours, but it's also delicious. I've definitely written about late night before, but some of my favorites at late night are dumplings, corn dogs and double cheeseburgers. In fact, I liked it so much that I would often take quick Snapchats of the food. Late night was also a great time for me to catch up with some friends that I hadn't seen all day, so I've also enjoyed Snapchat memories of some older inside jokes. Although I spent my summer in Montreal and Shanghai, I still found myself missing a Hop burger more than I'd like to admit. 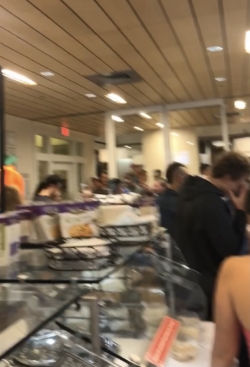 In line to pay for my chicken tenders, another late night classic

Finally, something I've noticed about the Snapchat memories I've been sending and receiving is just how weird the videos are. I've relived memories of crazy flair outfits, backflips at Collis, and singing on the way to Baker Library, just to name a few. However, while I was living these moments, they felt just like another day at Dartmouth. My time away from the college has allowed me to appreciate how spirited and authentic my experiences have been. Everyone I met a year ago wasn't afraid to be unique and be themselves, and it was never weird because everyone was accepted for who they were. As I look forward to my time on campus again, I can't wait to do crazy things with my friends, wearing silly costumes and themed outfits without worrying about being judged or dismissed. While I look back on all the happy memories from one year ago, I truly can't wait for one year later!