Hello there! My name is Joanna Jou, a '26 from El Paso, TX. At Dartmouth, I plan to major in Economics and Sociology, but still keeping my options open. Outside of academics, I love walking/hiking/enjoying the outdoors, relaxing out on The Green and Baker lawn, acai bowls from Collis and The Fern, spending time with family/friends, and reading. Please feel free to email me with any questions you may have - I'm beyond stoked to have y'all follow along as I create my own version of Dartmouth!

Intended Majors in Economics and Sociology

Meet three '26s Lexie, Liliana, and Keva as they share their experiences (so far) and their journey to Dartmouth.

What is your name and what tribe/island are you affiliated with?

Lexie: My name is Lexie Gauthier and I'm from Polson, Montana. I'm Salish from the Confederated Salish and Kootenai Tribes.

Liliana: I'm Liliana Ciraulo from Hawai'i. In terms of indigeneity, I'm Native Hawaiian, or Kanaka Maoli; my family is all from the island of Oʻahu. My Hawaiian side of the family [like where my more ancestral ties are] are on the north shore of the island (Oʻahu) in a place called Haleʻiwa. 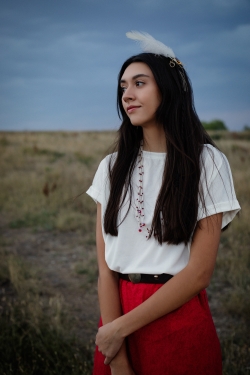 What are your academic interests here at Dartmouth?

Lexie: I think (a major) in linguistics - it changes every other day. And definitely Native American and Indigenous studies, whether that's double majoring or minoring in it.

Liliana: (I plan to) major in anthropology, and am considering a minor in either global health or environmental studies - whichever I end up liking more.

How did you first hear about Dartmouth? And what made you decide to apply here?

Lexie: I heard about Dartmouth from my high school librarian; she is an alum. I knew I wanted to apply here because I knew they (Dartmouth) had a good program for Native students and that would kind of help with the culture shock of going to a college, and I knew they had a really strong community in general here; I really wanted to be a part of a small community similar to my hometown.

Liliana: When I was a sophomore, someone I knew in high school went on the IFI (the Indigenous Fly-In Program), which was the last year that was in person before the pandemic. He came back with a hoodie, or sweatshirt that said "Dartmouth", and I asked what that was. I wasn't really thinking about college that much as a sophomore, but I think once that point [of looking at colleges] kinda hit, I realized "Oh wow, I thought Ivy League schools, or schools like that were completely untouchable". But then I realized like whoa there's a school out there that is an Ivy that caters to Indigenous students so that's really cool, and it just kinda furthered from there until I actually applied as a senior.

Keva: My aunt went here and graduated in 2010. I first visited Dartmouth during her graduation and got to stay in the Native American House (NAH). I just remember the Native community being so comforting and that stuck out to me when I was deciding on where to apply.

Did you do the Indigenous Fly In (IFI) program? Tell me a little about your experience.

Liliana: I did in October 2021; it was virtual but a very valuable experience. I remember that they had a writing workshop and had us looking at example applications, and a lot of talking in regards to bringing in students for virtual panels to give us insight on what the indigenous experience here at Dartmouth is [because we couldn't visit in person and really get an in person tour]. I think they did a good job in conveying to us what life would be like here [at Dartmouth]. I still remember a lot of the faces I'd see from the panels, and also now see in person, which was a nice way to build connections. My roommate and I both did IFI; we didn't know each other back then, but we do now. (Fun fact: Liliana and Keva are roommates)

Keva: Yeah, it was online [which was kind of a bummer] but I got to hear from many different speakers whether they were faculty, current students, or people that ran the Native American Program. They (IFI) gave us a lot of information about the NAP, admissions, majors, stuff like that.

Given Dartmouth's efforts in recommitting to educating and supporting Native and Indigenous students as outlined in its founding charter, was this a reason why you decided to come to Dartmouth?

Liliana: Yeah. I wouldn't say Dartmouth is perfect and probably never going to be [perfect], but I think the efforts they're making are on the right path. And because they foster a native community here, that was something really important for me because [before I really knew what Dartmouth was] I never expected to go far and probably just expected to stay somewhere close to home with a community around me. After hearing all the student testimonies specifically from Native and Indigenous students here saying how it (Dartmouth) may be in the Upper Valley of rural New Hampshire, but it's a super home-y and welcoming community; that was something super crucial for me in choosing where I wanted to go to college.

In 1-2 words, how would you describe the Native/Indigenous Community at Dartmouth?

Are there any organizations/groups you are involved with that supports the NAD (Native Americans at Dartmouth)?

Lexie: In the Native American Program (NAP), there is a lot of tutoring available through that (the NAP), so I get tutored by the NAD tutors. I spend a lot of time in the NAP, which has the student lounge and common space that always has something going on; it is often very lively.

Liliana: Overarchingly, under the NAP, there is the Hōkūpaʻa [student organization] for the Native Hawaiian students, which is a program that I'm part of. We have Lūʻau coming up in spring term, but so far we've had smaller gatherings such as having breakfast with each other.

Keva: Right now I'm in Beading Circle, which gives Native students a chance to connect with their culture, learn how to bead, and interact with each other. I'll go to things at the Native American Program; they bring in a lot of speakers, or do ISPA (Indigenous Student Peer Advisors) events - we've made ribbon skirts around the time of Indigenous Peoples' Day, had Orange Shirt Day, and are doing a frybread workshop this Sunday.

What are some events organized by the Native American Program?

Lexie: The fashion show was really fun just to see everybody's regalia and how they express themselves through Indigenous clothing. I got to wear the medallion that was featured in the show Reservation Dogs.

What are you most looking forward to for the rest of our first-year?

Lexie: I'm excited for Pow-Wow because my dad might get to come out here and teach other students how to set up tepees and sow them. Pow-Wow is a celebration with food and when people come together to sing and dance.

Liliana: Well I've never experienced a New England winter, so I'm excited to see intense and falling snow. I'm also excited for the Winter Carnival and have my little winter wonderland moment. Spring term is also very exciting; that's when the '27s start getting in and Access Days happen, Pow-Wow and Lūʻau, more opportunities to go outside. Fall season has been very fun and full of new things that I wouldn't have otherwise experienced anywhere else truly.

Keva: I'm looking forward to participating in the Pow-Wow, whether that's planning or helping out with it, and going to the Lūʻau; that'll be fun. I'm also just looking forward to the first-year experiences like Winter Carnival and Green Key!