Hey! I'm Eva, a '25 from the suburbs of New York. Though pursuing engineering, I'm passionate about combining my interests in medicine and art within my studies. When I'm not working on problem sets at Baker Library, you can find me playing guitar with my floormates, scouring the internet for local concerts, or utilizing nap spots in the Tower Room. I love Dartmouth for being the perfect place for someone with infinite interests and I hope this blog inspires a similar sentiment!

Though there are a ton of things to do on the Dartmouth campus on weekends, (for example: I had to skip out on a woodworking workshop, roller skating, apple picking, AND a movie night with my friends) traversing outside Hanover can be necessary. This weekend one of my best friends invited me to their college campus in Massachusetts and the hardest part was figuring out how to get there and back. Though traveling along can be incredibly nerve wracking, I found a combination of Zipcar, amtrak, and the bus system to be easy and stress free!

The closest train station to campus is in White River Junction which is an 11 minute car ride, a 23 minute bus ride, and a 2 hour walk (yikes!). Since I'm a freshman without a car as well as a non-athlete, the bus ride to the train station was the most plausible option. The bus stop is right outside the library near Novack Cafe (a pretty central spot on campus) and to get to the amtrak station you just need to take the green line and tell the driver you're going to the White River Junction station. According to the driver I had, you can also just say you're going to "amtrak." She told me never to say "White River Junction" because it confuses the drivers. The ride was very pleasant and I talked to the driver the entire time since the bus was pretty empty.

Beautiful fall leaves over a river the train passed
Next was the train ride! I didn't expect the entire 2.5 hours to be as gorgeous as they were. The northeastern fall really showed itself off with rolling hills and vermillion trees dotting various rivers and farms. I'm not lying when I say my eyes didn't wander far from the windows often. I brought my computer to do work but didn't end up doing any, unfortunately. (Side note: Amtrak trains always have pretty great wifi.) 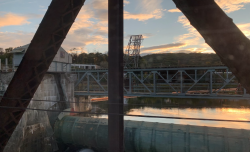 Sunset over a dam on my ride home!
When I finally arrived in Massachusetts, my friend picked me up with a Zipcar and that was the end of my journey there! Zipcar was also my way of getting home from the train station when arriving back in White River Junction. Dartmouth provides a discount of the yearly Zipcar payment which makes traveling very affordable. Instead of being around $70 a year, it's $25 for Dartmouth students. After that initial fee, each ride is $10-$11 for an hour. As long as you get the car back clean and with ¼ tank of gas, you're good! There are several cars all around campus lots. I haven't had a negative experience with it yet and find it to be a super convenient service since there is no Uber or Lyft system around Hanover.

Though scary at first, I'm excited for the next time I travel off of campus.