I'm Eva, a '25 from the Upstate New York! Though pursuing engineering, I'm passionate about combining my interests in medicine and art with my studies. When I'm not working on problem sets in Sanborn, you can find me scouring the internet for local concerts or dancing to the music in the dining hall. I love Dartmouth for being the perfect place for someone with infinite interests and I hope this blog inspires a similar sentiment!

My favorite part of Dartmouth is being able to immerse myself fully in all of my different interests. In my other blog posts, I've talked about being a STEM student, getting involved in scientific research, taking a theater class, and still pursuing my love of the fine arts! In this post, I'll be focusing on how I balance everything during the busiest part of the performance process: tech week.

I'm a stage manager in this year's main stage musical production called Pippin. This musical is about a young boy looking for his purpose in life, who then finds himself in a series of whimsical events as he becomes acquainted with a circus crew. As one stage manager out of a group, my role is to keep everyone in the creative team in the loop of the production. This includes taking notes during rehearsal and sending out emails to all those involved, writing down blocking during acting rehearsals, and running the backstage elements during the show.

Tech week for a musical performance involves the incorporation of technical elements to the acting and vocal demonstration in the show. At the beginning of the week, the entire cast starts by reblocking each scene on the main stage, seeing as they've been practicing in separate rehearsal spaces. After this begins the process of integrating the lighting, sound, and scenery into what everyone had rehearsed. As a stage manager, my role during this stage is to be at every rehearsal and work with the rest of my group to manage each scenic element and prop backstage! Pippin, being a show that involves a circus, has a lot of scenery. Included in what the stage managers are responsible for are a neon green throne double my size, a giant floating swing, a shopping cart, three glowing doors, and more! One stage manager out of the group also has the responsibility of running the entire show over a headset. In order for all the light cues and set elements to properly sync with each other, one person needs to watch the show from the back of the theater and communicate with the rest of the crew on the headset system. 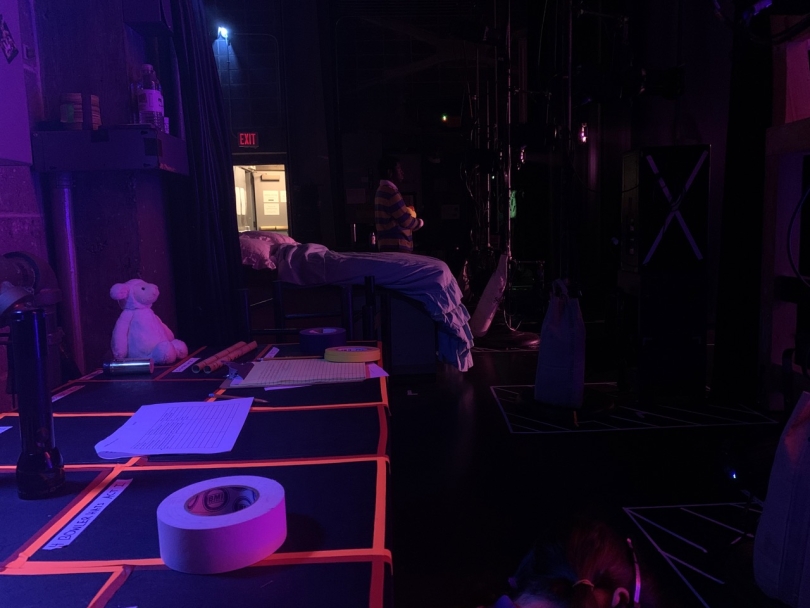 The view from backstage!

Because tech week is such a full-time commitment, especially right before finals week, staying on top of work is difficult! To properly manage, I've reached out to my professors to let them know that I will likely be asking for extensions or extra help over the course of the next week or so. In addition, I've reached out to the Academic Skills Center for an individual tutor in one of my hardest classes to ensure I don't fall behind!

I've found the community within the arts department to be super supportive of the life I've made for myself at Dartmouth thus far. My stage management team as well as my teachers all understand how hectic student life can be, and are able to be super accommodating when necessary. The other students taking part in the production have also been a huge help to my success thus far given how dedicated they all are. Among the cast and crew, there are individuals majoring in every area Dartmouth has to offer. During breaks and before rehearsals, there are students working on their homework and making sure the people around them are comfortable doing theirs too!

Though it may seem crazy to participate in such a stressful event so close to the most hectic part of the school year, the support Dartmouth provides and the care each student has makes it possible.