Before coming back to Hanover for the winter term, I definitely was taking my warm, southern days for granted. I did not expect truly how it would feel to walk outside when it is below zero and the sun is glaring onto the fresh snow. However, wearing layers and staying inside are definitely the better options when it comes to staying warm. There is something really cozy about sitting inside of the library watching snowfall outside and doing work for a class. Whenever I have been studying this term, it has been by windows because I like watching the outside while still being warm. 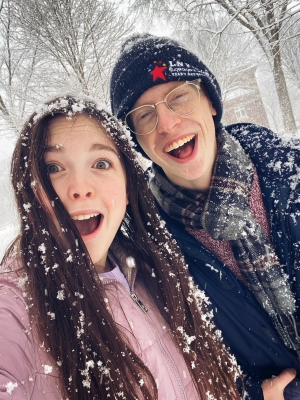 Although the inside provides plenty of warmth, the outdoors provides plenty of fun. After a long Monday morning of getting very little work done (whoops), I decided to go build a giant snowball with my friends. It had snowed several inches early that morning so the snow was perfect for building snowmen. Unfortunately, my friends had to leave after a little while to get work done, and on the way back to Novack, I decided to make a snowball for the fun of it. When I threw the snowball directly at my friend's chest, it was time to run away; and eventually we had a huge snowball fight between the three of us. 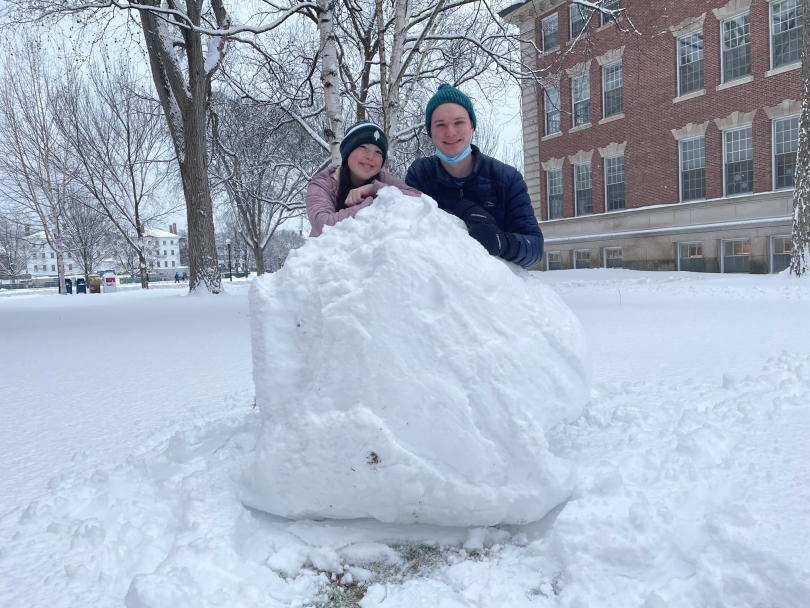 This was the giant snowball that we started rolling!

Eventually, I realized that I would need to shower and change clothes, so I called another friend to help me roll the snowball again. Once this snowball fight stopped, I struggled with my new friend to roll this giant ball of snow. It was time to make a decision about what to do with it. While we were discussing what to do, one of my friends from Friday Night Rock walked by and said to make a snow duck. We then proceeded to make a human sized snow duck near the admissions office, and it was so much fun to actually make a giant snow sculpture for the first time with my closest friends on campus. Although the outdoors can be a little chilly, I definitely recommend spending more time outside in winter whenever it is warm enough! This day was definitely the highlight of my term so far. Plus, snow pictures are so beautiful and my family loves it when I send them pictures of campus covered in snow!