I finally took advantage of Dartmouth's location this weekend and went skiing for the first time this year! The 10-week term goes by fast, so when I saw that I had some free time this weekend, I jumped at the opportunity to take a little ski vacation. It's amazing how easy it is to go skiing at Dartmouth, and there are a bunch of trails available.

Personally, I decided to not go to the Dartmouth Skiway this weekend and instead went to Vermont, where one of my friends has a house. Most people go to the Dartmouth Skiway, though, as it's only 15 minutes away from campus and there are shuttles that take students there. I thought it would be a good idea to get away from campus for a few days, so I was happy to go up north a bit more. Initially, we thought we would have to Uber to Vermont, but there's a public bus transportation system that is super cheap and convenient. I got on the bus at the Hanover Inn, which is a five-minute walk from my dorm, and the bus took me straight to Randolph, where the ski trails are. 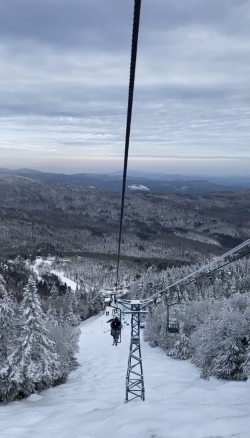 It's super cool how students at Dartmouth can go skiing basically whenever they want. For example, my roommate took a trip up to Vermont for MLK weekend. Last week, a classmate of mine went skiing in the morning and made our class in the afternoon! There's nothing like forgetting about your worries and going down the mountain, and I'm so grateful I can do that at any time here.

If you don't know how to ski, that's not a problem either! There are classes you can sign up for, and the ski instructors are students that you can get to know! One of my friends is a ski instructor and he's a super nice and cool guy. He got to campus early just for ski training, and he's definitely prepared to take inexperienced skiers around the slopes.

Most students at Dartmouth know how to ski, but that's not because people come in knowing how to. Rather, since skiing (or snowboarding) is super accessible and easy at Dartmouth, a lot of people get around to it eventually. I know I'll definitely be skiing more this winter, and I'm excited to see how much I improve over the next four years. I hope to see you on the trails!

As I return to campus to start my junior spring, I can't help scrolling through my photos and seeing all of the amazing experiences our Linguistics DSP had in Hawaiʻi. Here are some highlights.

It's surreal that two terms of my freshman year already swung by. The last six months were filled with important lessons and personal growth. And I wanted to share what some of my "key" takeaways were!

How I deal with finals week!

I have been at college for two terms now. Although it has been such a short time, I already feel like I have found my own routine and strategies to navigate the class schedule and all our assignments.

Routine and Accountability… Let's do this.

Although '22 winter went well, I lacked a steady routine that kept my mental health in check. Let's fix that this '22 spring term.

I had a wild term filled with many adventures. I took some time to reflect on my term and celebrate the chaos! Below are my five favorites of the winter term!

Here are my thoughts on my third winter on campus!