Writing Sports for The Dartmouth

In high school, I was a news reporter for my school newspaper. Coming to college, I knew I wanted to continue writing, and The Dartmouth, which is America's oldest college newspaper, was my chance to cover news of the undergraduate population. I decided to try something new and write for the sports section.

I love sports. Before coming to Dartmouth, I was an avid sports fan, cheering on Alabama football and the Atlanta Braves (who just won the World Series, woohoo!). Dartmouth students love their sports teams, and because close to a fourth of the students are DI varsity athletes, many of my peers are in the games I cover.

I have been cowriting my articles with a fellow '25, and we have so much fun at games reporting and taking notes together. It seemed daunting writing for a highly acclaimed college newspaper as a freshman, so the sports editors matched us for added support.

Our first assignment, the Women's Field Hockey game, was tricky. As someone who had never seen a field hockey game before, I was hesitant to be in charge of such a story. However, interviewing players before the game gave me an outline of the game and expectations for the team's performance. Attending the game was exciting; spectators were cheering on their friends, fast-paced balls were flying, and a new sport was unfolding before my eyes. Though Dartmouth ultimately lost, the women were happy to give upbeat post-game interviews. 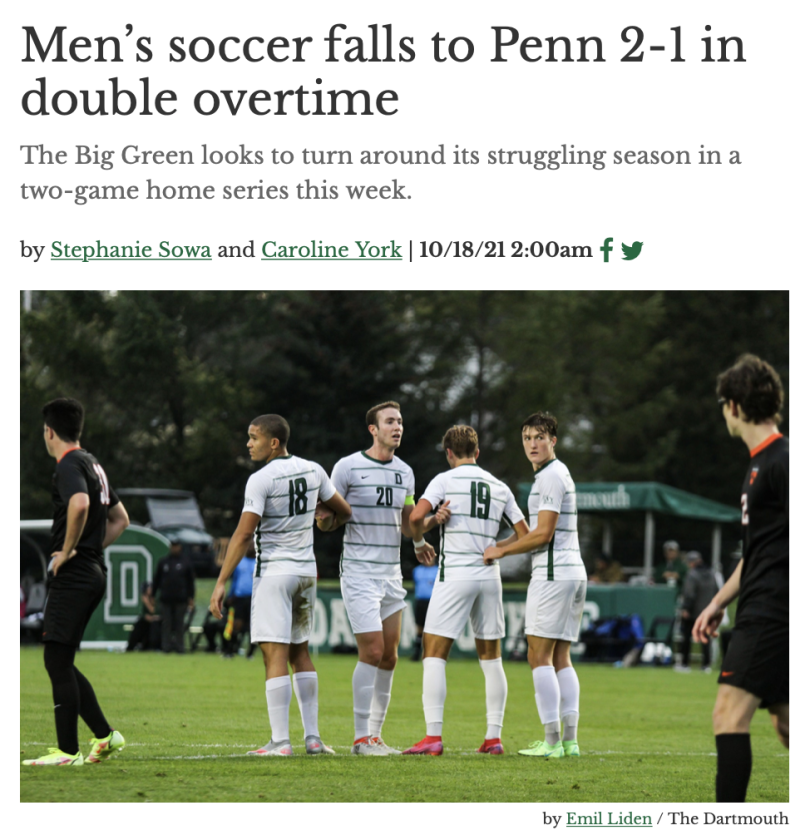 A picture of the Men's Soccer Article online!

Next, I reported on the Men's Soccer team's progress in the season. The team was 0-10 when I spoke with the players, but their attitudes were unfailingly positive. In the process of interviewing the team, I learned about special Dartmouth plays and how competitive the Ivy League is in soccer.

For my current story, I am reporting on the wildly successful Women's Rugby Team, who is currently ranked #1 in the country. I had the opportunity to report on 2020 Olympian Ariana Ramsey '22, which was incredible!

If you can't tell already from my involvement with this blog and The Dartmouth, I really enjoy writing! Being a writer for The Dartmouth allows me to express the voice of athletes and to learn about underrepresented sports along the way. It allows me to share sports news with students, alumni, and community members who equally love the Big Green!

The Great Snowball Fight: A Sense of Tradition

After receiving my first mysterious email from Dr. Seuss, I've been thinking a lot about the nature of tradition at Dartmouth.