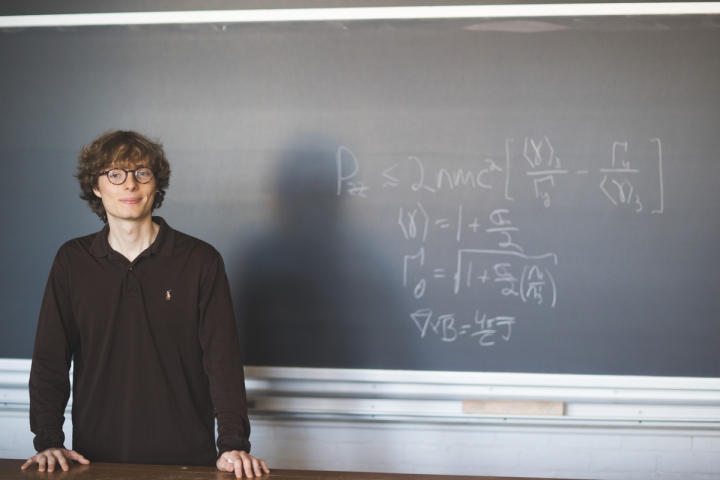 Matthew Goodbred ’23 has co-authored a paper that proposes a new theory explaining how magnetic energy can be very quickly released with explosive energy into charged particles in extreme environments such as black holes. (Photo by Katie Lenhart)
Body

Neutron stars and black holes may be stellar corpses, but they are among the most active celestial objects. They produce some of the highest-energy radiation ever observed, and scientists have long puzzled over the physics that underlies the process powering their energetic emissions.

Now, in a recent paper published in Physical Review Letters, a Dartmouth physics major and an assistant professor have proposed a new theory that explains how magnetic energy can be very quickly released with explosive energy into charged particles in these extreme environments.

Similar magnetic explosions also occur closer to home, setting off solar flares and the Northern Lights. They can be observed wherever charged gases, called plasma, are found—even in a lab, says Matthew Goodbred ’23, the paper’s lead author.

The electrons and ions in a plasma flow along magnetic field lines that usually remain separated. When lines that point in opposite directions get close to each other, however, they can merge and whip apart, releasing a formidable amount of energy that accelerates the plasma particles to very high speeds—a well-studied phenomenon known as magnetic reconnection.

Astrophysical environments, particularly around neutron stars and black holes, are special because their magnetic fields are so strong.

Earlier this year, co-author Yi-Hsin Liu, assistant professor of physics and astronomy, presented an explanation for the process that speeds up the rate of reconnection in solar flares. Close on the heels of that work, Goodbred sought to examine the mechanism of reconnection in some of the densest objects in the universe, such as neutron stars, which are formed when a massive star runs out of fuel and collapses.

“Astrophysical environments, particularly around neutron stars and black holes, are special because their magnetic fields are so strong,” says Goodbred, who began working with Liu remotely during the pandemic, in summer 2020.

Their plasmas are also different, consisting of electrons and their antimatter that both have the same mass. The solar plasma is made up of protons and electrons, which have vastly different masses, so the physics is different in the two scenarios, he says.

To come up with a mathematical description of reconnection in such environments, Goodbred looked at the energy flow at the reconnection site. His model predicts that supporting magnetic field reversal around the site when the field is extremely strong is only possible when there are a lot of fast-moving particles that can carry electrical current.

The current carriers in the plasma take away much of the energy, creating a pressure void of sorts that rapidly draws in the surrounding magnetic field, thereby setting the stage for reconnection to proceed so quickly.

“This new derivation provides the first theory derived solely from basic physics laws that explains the fast reconnection rate in such systems, which was observed in all previous kinetic simulations (but not really explained),” says Liu.

The predictions of the model were also supported by simulations that the authors carried out.

“I really find this phenomenon of reconnection very fascinating,” says Goodbred, “especially when applied to astrophysical situations, where it’s so hard to imagine the scales and the power of these explosive events taking place all across the universe.”

Goodbred, who grew up near Nashville, Tenn., plans to take a gap year after graduation, and looks forward to indulging his love for the outdoors as he prepares to apply to graduate school and pursue a PhD. He enjoys theory because it feels creative.

“There are many possible paths to explore when solving a problem,” he says, “and it is satisfying to narrow down these possibilities into one final theory.”