Stacey '16 Wins Gold as Canada Gets Revenge in Hockey 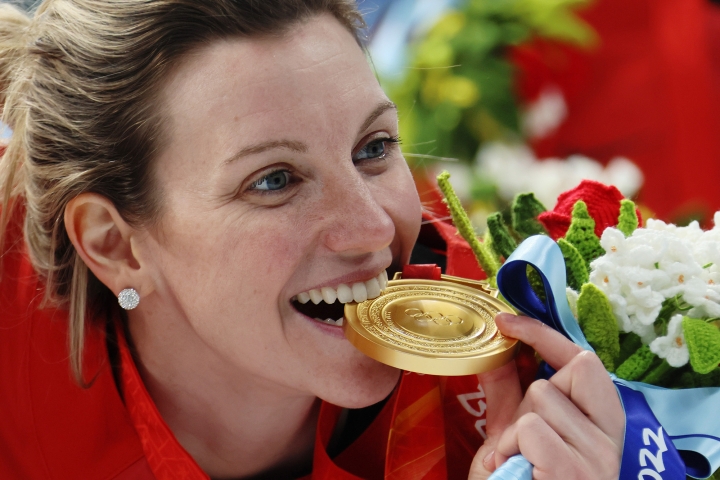 Forward Laura Stacey ’16 swayed in a line early Thursday, arm in arm with her fellow hockey Olympians, as they sang the Canadian national anthem at the gold medal ceremony in Beijing.

The 3-2 victory over their U.S. rivals was a reversal of the bitter 3-2 loss to Team USA in a shootout in Pyeongchang in 2018—one that Stacey and most players on both teams experienced first-hand. Team Canada finished the 2022 Winter Olympic Games with a perfect 6-0 record.

Last night’s win put Canada up 4-2 over the U.S. in Olympic gold medal game victories. The two teams have met in six of the seven Olympic finals played since women’s hockey was added to the Winter Games at Nagano, Japan, in 1998.

Dartmouth women have medaled in every Olympic hockey final since Nagano, and Big Green players have brought home nine gold, two silver, and two bronze medals playing for either the U.S. or Canada over those 24 years, including the silver for Stacey four years ago and her gold from Beijing. “The rivalry between these two powerhouses continues to elevate this sport to incredible new heights,” said A.J. Mleczko, an analyst for the game who won gold with the U.S. women’s hockey team at the 1998 Winter Olympics.

Stacey, who scored two goals for Team Canada in the 12-1 opening round win over Switzerland, had limited ice time in the gold medal game but drew attention when Canada had a player in the penalty box, giving the U.S. a powerplay advantage.

Play-by-play announcer Kenny Albert called Stacey out for aggressive penalty kill play, noted her Dartmouth hockey record, and added some color, noting that her great-grandfather is King Clancy, a Hockey Hall of Famer who won the Stanley Cup with the Toronto Maple Leafs.

Tricia Mangan ’19 finished 11th in the women’s Alpine combined event early Thursday. She was the only U.S skier to finish the race after her three teammates, including media favorite Mikaela Shiffrin, skied out on the slalom run. Tricia Mangan ’19 skis the slalom in the second part of the Alpine combined race on Feb. 17. Mangan was the only Team USA skier to finish the race and moved up from 20th place after the downhill to finish 11th overall after the slalom run. (Photo by Getty Images)

Mangan was at 20 on the leader board after the downhill, 3.47 seconds behind leader Christine Scheyer of Austria. Network coverage was trained on Shiffrin, who finished fifth in the downhill, going into the slalom. It was snowing heavily by the time the second run started early Thursday, and Mangan moved up quietly as one skier after another skied out, including Shiffrin, who suffered her third DNF of the games.

By the time Mangan started her slalom run, she had moved up to 13th in the standings and was the only American in the race. In an outstanding run, she made up time, moving up to 12th place at the second interval and finishing in 11th place.

Brennan and Dunklee press on

Cross country skier Rosie Brennan ’11 and team sprint partner Jesse Diggins finished fifth in a thrilling race early Wednesday that saw the duo move into third place in the last loop after Diggins took over before falling back to fifth. It was Brennan’s second brush with a medal during the Beijing games. She finished fourth behind teammate Diggins in the sprint last week while Diggins took the bronze.

In the women’s 4X6km biathlon relay Susan Dunklee ’08 turned in the best time of Team USA, and the four Americans finished 11th overall, 4:47.4 behind gold-medal winner Sweden with a time of 1:11:03.4.