Experts say only a brief window of time is left to respond. 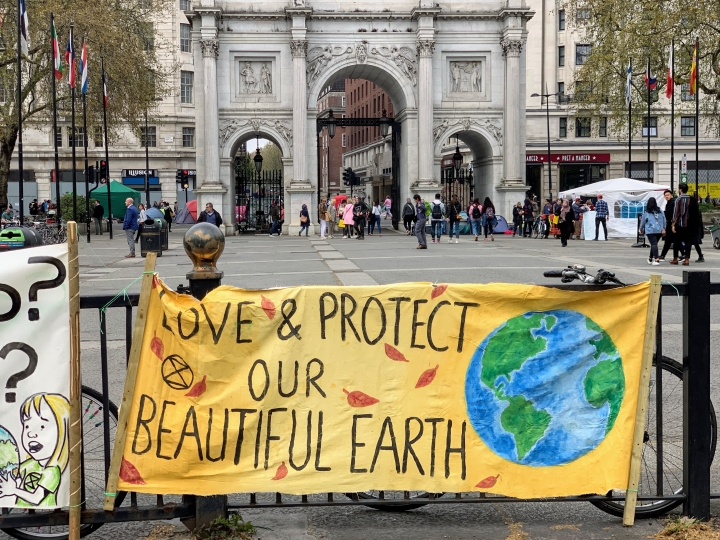 Activists concerned about climate change placed this sign near Marble Arch in London in 2019. (Photo by John Cameron)
Body

A dire report from the United Nation’s Intergovernmental Panel on Climate Change (IPCC) focuses on the impacts that will occur from climate change and discusses opportunities for adaptation.

When the report was released in late February, UN Secretary-General Antonio Guterres called it “an atlas of human suffering and a damning indictment of failed climate leadership,” and said it “reveals how people and the planet are getting clobbered by climate change.” Dartmouth experts lay out the key takeaways from the report’s stark findings, emphasizing that the brief window of time to respond and take action is shrinking.

This report highlights how much climate change has already impacted humans and natural systems, particularly through extreme climate and weather events, and how the most vulnerable people and systems are being disproportionally impacted. An important conclusion is that once temperatures exceed pre-industrial level by 1.5 degrees Celsius, however temporarily, the loss for the biodiversity and extinction of species will be permanent, impacting all aspects of our lives from agriculture to tourism.

This report also highlights how actions on adaptation, like flood defenses, early storm warnings and use of drought-resistant crops have increased. But these actions are unevenly distributed and are not being adopted fast enough. The gap between adaptation actions and adaptation needs is growing. So, while there are still several options we can choose from at this stage, the more we wait the fewer options we will have.

The IPCC has shifted from saying it is “virtually certain” human influence has warmed the ocean, atmosphere, and land to saying it is “unequivocal.” This shift emphasizes the weight of evidence both showing warming and linking human greenhouse gas emissions to that warming.

Scientists are certain: climate change is already actively hurting and harming people and life on our planet and, instead of collectively working on the solution, we are on track for it to be much, much worse without significant shifts. In the brief window of time available to us, the only workable climate solutions must also address structural inequalities in our social and economic systems.

I had three reactions to the report: First, I thought how important it is for me, as an individual who has studied climate science and engaged in policy throughout my career, to continue speaking out about the importance of investing in inclusive, sustainable, and equitable pathways and policies to climate mitigation.

Second, as director of the Institute of Arctic Studies, I am now even more driven to ensure we engage and highlight the knowledge and innovation of our Arctic colleagues and partners—Indigenous peoples and local communities—who are at the front lines of climate change. Keeping those knowledge connections open as we advance inclusive and informed climate solutions is a priority.

Finally, I recognized how privileged I am to be here at Dartmouth, surrounded by driven and knowledgeable colleagues across disciplines. As this report calls us to action, I know that Dartmouth can be a leader in climate scholarship and policy.

This report presents, in raw fashion, the stark reality that our planet will never be the same. It is morally reprehensible that our nation has not taken drastic steps to mitigate our contributions to climate change. The evidence is clear. Delaying further, given what we know, is unconscionable.

We must make drastic and transformational changes to how we interact and manage natural ecosystems for them to sustain through impending climate change. In the report, the authors relate that if we stay on our current path of emissions, and end up with increases of 3 degrees Celsius, the upper limit of species that will likely face a very high risk of extinction is 30%. Additionally, from a human perspective, under all scenarios, approximately one billion people are projected to be at risk from coastal-specific climate hazards such as flooding and sea level rise. Both of those are tragic outcomes. Catastrophic. To me, this report indicates that significant suffering to both people and species is imminent.

I encourage everyone to read through the Summary for Policymakers that the IPCC puts out for each working group. Even if the report is challenging to read, I think we owe it to future generations and vulnerable communities and species who will be catastrophically impacted by climate change to at least make an effort to read the writing on the wall. Let us not go gentle into this good night.