Admission Offered to First Members of the Class of 2026

Posted on December 13, 2021 by Office of Communications

Dartmouth has allocated a record level of undergraduate scholarship support. 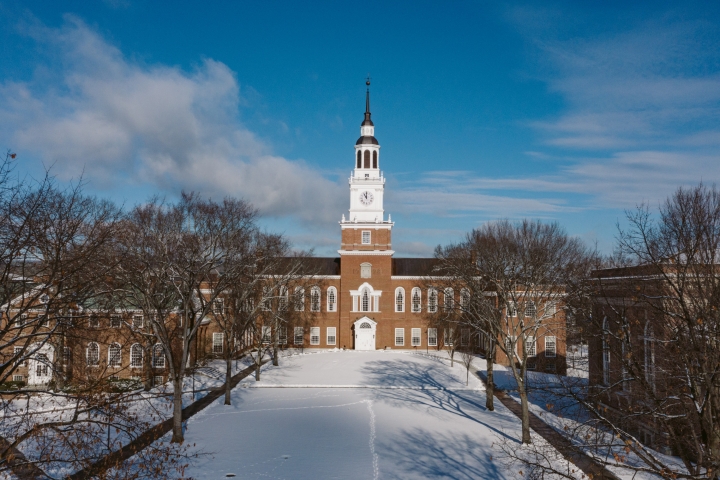 When the Office of Undergraduate Admissions released decisions on Dec. 10, 530 students were invited to join the Class of 2026. Earlier this month, Dartmouth matched with 30 high-achieving, low-income students through its partnership with QuestBridge, a national college access organization based in Palo Alto, Calif. Selected from a pool of more than 1,200 applicants, the QuestBridge matches represent an all-time high. The combined cohort of 560 applicants have been invited to join the Dartmouth community in the fall of 2020.

“Admission officers were dazzled by this year’s early decision and QuestBridge pools,” says Lee Coffin, vice provost for enrollment and dean of admissions and financial aid. “It is a challenge to evaluate a group as large and talented as our recent early decision pools have been. Admission officers often say selectivity requires tough choices and that has never been more true than it is today. Each one of these applicants is impressive in their own way.”

Over the past decade, early decision activity has jumped 67% as increasing numbers of students from around the world have identified Dartmouth as their first choice. This year’s early decision and QuestBridge acceptances include students from 49 U.S. states; Washington, D.C.; and 37 nations, with a record 16% living outside the U.S.

“Dartmouth’s geographic center is steadily shifting south and west as well as overseas,” Coffin notes. “Those regions are Dartmouth’s future and it is exciting to see so many early acceptances originating from these admissions growth regions.”

In fact, a record 57% of this first wave of acceptances live in the South, the West, and abroad. Californians represent more than 10% of the early class, with students from Texas and Florida also among this year’s top six states, along with residents of New York, Massachusetts, and Connecticut. The United Kingdom, Canada, India, and China comprise the largest international cohorts.

When ranked, 93% are among the top 10% of their high school class and a record 22% are projected to graduate as the valedictorian or salutatorian of their graduating class. A record 54% attend a public or charter high school.

These new aid policies are investments in people.

Supported by expanded financial aid resources generated through The Call to Lead fundraising campaign and several recently announced financial aid policies, the early cohort includes a record percentage of first-generation college-bound students as well as sustained levels of racial and global diversity. Seventeen percent are first-generation college students—a cohort that was 10% of the early Class of 2021—and 40% of U.S. citizens and permanent residents are students of color. A record 14% are international citizens.

“As decisions were released, the average scholarship was a record-high $62,896, and that figure will certainly increase as we finalize aid offers in the coming days,” he says.

Koff reports that 23% of all students receiving early offers of admission, including the QuestBridge cohort, were awarded a full scholarship covering tuition with no loans. Dartmouth increased the income threshold for its no-loan policy to $125,000 last spring. “This is such a welcome development,” Koff says.

In addition, approximately 100 families qualified to have the parental contribution waived after Dartmouth recently enacted a commitment to eliminate such contributions for families with income and typical assets at or below $65,000. The Class of 2026 is the first class to be accepted with this zero-contribution policy in place.

“These new aid policies are investments in people,” Coffin says. “And they are clearly helping us respond to the urgent question of affordability for low- and middle-income families.”

Dartmouth is planning for an entering class of 1,150 students next fall. “We’ve set a fantastic academic and demographic foundation with these first invitations of admission,” Coffin says.

The application deadline for regular decision is Jan. 3.