Due to forecasted weather conditions, the 2019 Dartmouth Powwow will be held in Leede Arena on May 11-12. Grand entry will start at 12 p.m. on both days.

Skyler Kuczaboski ’21 will help lead the procession for this year’s Powwow, a springtime celebration of Native American traditions. Kuczaboski, who co-chairs the celebration with Shelby Snyder ’21, will serve throughout the weekend as Head Woman Dancer.

“During Grand Entry, the Head Woman and Head Man dance behind the veterans, leading everyone in. Their job throughout the powwow is to dance every song, and with people being honored,” says Kuczaboski.

The 47th annual Powwow, which will take place on the Green May 11-12, is a chance for members of the Dartmouth and Upper Valley communities to watch and take part in a broad range of Native American dances, music, arts, and crafts. In case of heavy rain, the event will be held in Leede Arena.

Growing up in St. Paul, Minn., Kuczaboski says she learned about the traditions of her Ojibwe tribe not from her family, who had been uprooted from their reservation, but at the city’s American Indian Magnet School. That’s where, as a young child, she learned how to do the jingle dress dance, which, she notes, has Ojibwe origins.

As one tradition has it, jingle dress dancing started when a medicine man had a dream about an ornamental dress that conferred restorative powers to the dancer who wore it.

“He made a jingle dress for a relative who was sick, and as she danced around the drum, she became healed,” Kuczaboski says. “Jingle dress dancers dance for people who can’t dance, people who need healing. It can be self-healing as well. My jingle dance honors all the women who heal. I want to invite old-style jingle dress dancers to join in and be honored for doing something so selfless.” 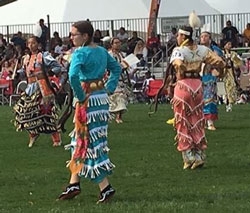 Kuczaboski’s friend and fellow Ojibwe member Elsa Armstrong ’20 will also perform the jingle dance at the Powwow, which, at Dartmouth, is a competitive event. Prizes including cash, custom jackets, and a handmade Ojibwe blanket.

For Armstrong, Dartmouth Powwow is a family tradition.

“My mom, Beth Paap ’87, also went to Dartmouth, and I have a picture of her doing a jingle dance in the Bema, where Powwow used to be held,” says Armstrong. “I live in a small town in northern Wisconsin on the Ojibwe reservation, so I’ve been lucky to have cultural connectivity growing up. My mom sees jingle dancing as a responsibility—my sister and I got our first dresses when we were 3 or 4—and as a way to pass down tradition.”

For Armstrong and Kuczaboski, a powwow is not a sacred ritual but rather an opportunity for peoples from different tribes to socialize together in a festive atmosphere. Food vendors come from all over the country to serve Native American specialties.

“To me, it’s a metaphor for indigenous identity,” says Kuczaboski. “It’s relatively new on the timeline of our ancient history, but incorporates traditions from the past and from many tribes. Powwow is a good way to express who you are, and for some, it is the most accessible way to do that. It’s an honor for me to be Head Woman.”