For Dartmouth Idol Finalists, Music Is All in the Family

The theme of this year’s Dartmouth Idol, the annual talent show for singers, was “royalty.”

“I was thinking about the late great queen of soul, Aretha Franklin,” says Idol founder and music director Walt Cunningham. “And Prince, and Lady Gaga, and Sir Elton John, and so many more. I wanted to celebrate music royalty.”

But even more, Cunningham says, he wanted each student contestant “to find the royalty in themselves.”

At Friday’s performance, hosted by Jake Johnson ’21 and Deby Xiadani ’15, the audience used texting to choose three winners. The $500 grand prize and the opportunity to record a two-song demo went to Raleigh Nesbitt ’19, who sang an Ella Fitzgerald medley. Cunningham says Nesbitt is one of the most gifted singers he’s coached in 12 years of presenting Dartmouth Idol.

“Not only is Raleigh incredibly talented and poised, she is a loving and giving person,” he says. 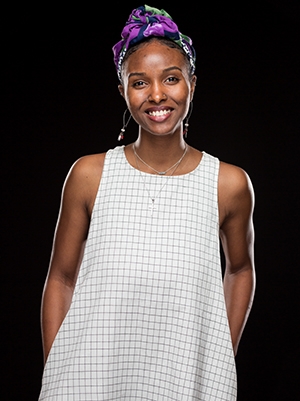 Raleigh Nesbitt ’19
Some of Nesbitt’s earliest and fondest memories involve music. As a young girl, she heard great voices—especially Ella Fitzgerald’s—spill out of her parents’ big stereo system in Pensacola, Fla. “I didn’t perform with any organized groups when I was young. I just sang a lot by myself—and in church,” she recalls. “I have a really wide range of interests in music, but as a singer I’m not all that spontaneous. I study the music and try to figure out what the artist is doing, but after that I just put my own spin on it.”

What Nesbitt likes best about Dartmouth Idol is the chance to reach a receptive audience. “My voice is a God-given gift, and no matter what I am doing or where I go, I want to use that to show what I believe in.”

A studio art major, she’s hoping to use her original artwork for her CD demo, as well as her voice. “I sing while I make art,” she says. 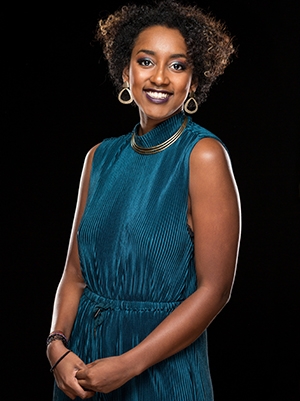 Nashe Mutenda ’20
Second prize—$250—went to Nashe Mutenda ’20, who grew up in Tokyo. Her father is from Zimbabwe, and her mother is from Sri Lanka. “At home we sing songs in Shona, my dad’s language, and we all sing in church,” she says, “so music was always an integral part of my childhood.”

A violinist and pianist as well as a singer, Mutenda says she didn’t enter the Idol contest to bring home a win—she just wanted the chance to “give music to people, to the best of my ability.” What she gave was a soulful performance of George Gershwin’s “Summertime,” from Porgy and Bess.

“Singing with a live band is so different from singing along with a recording,” says Mutenda. “You’re responding to instruments, to their choices as well as yours. It’s very fun and very engaging.” 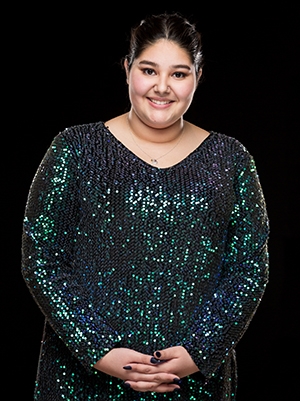 Caitlin Wanic ’21
Caitlin Wanic ’21 won the hundred-dollar third prize with “Mama’s Broken Heart,” a country song made famous by Miranda Lambert. (Cunningham helped her make a music video, which was shot in the home of President Philip J. Hanlon ’77.)

Wanic sang as a child but never in public until, when she was about 11, she got a gentle ultimatum. “‘OK, that’s it,’ my mother said. ‘You’re going to start singing in front of other people,’” Wanic says.  “Once I started to perform, I never really stopped. I just enjoy the act of singing. It can be very therapeutic. I like the way you can express things in music you can’t always say just using words.”

A member of the Bay Mills Indian Community of the Ojibwe tribe, Wanic is a Native American Studies major and a studio art minor and is looking forward to taking an indigenous music class next term. 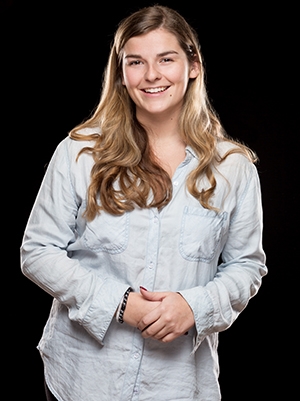 Alice Bennett ’20
Alice Bennett ’20, who is from Providence, R.I., says music was a bedtime ritual at her house. “As a little kid, I wasn’t great at sleeping, but if my parents put on a Disney CD I would stay in bed just to listen to it.”

She took voice lessons in high school and was in a rock band and musicals. “I went to an all-girls’ school and I was tall for my age, so sometimes I played men’s parts,” says Bennett. Her favorite: Don Lockwood, the role made famous by Gene Kelly in the 1952 song-and dance movie classic, Singin’ in the Rain. “When I perform a cover song, I just listen to the track over and over, trying to match the attitude and color of the song and then I try to make it mine,” Bennett says.

An English major and theater minor, Bennett comes from a long line of Dartmouth graduates, including her grandfather, mother, and sister.

Noah Drazen ’20
Noah Drazen ’20 says singing at Dartmouth runs in the family. “Both my parents went here. My dad sang with The Aires,  my mom was in the Decibelles, and I’m in the Aires right now, so that’s a cool connection I have with my dad.”

At his West Hartford, Conn., high school, music was Drazen’s travel ticket. “I sang in a men and women’s jazz group, and we went on a European tour,” he says. Closer to home, the Aires recently toured New England and spent a night at his house. “We just gathered with my family around our piano, and something just organically happened—we all started singing. It was one of my favorite moments.”

Drazen is a Spanish major, modified with music, and has been preparing for a medical career. But he’s having second thoughts about that. “I love music so much,” he says, “and I’m thinking I should focus on what makes me happy.” 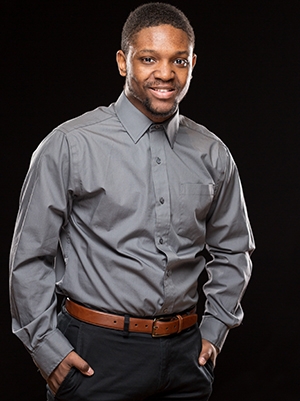 Torrance Johnson ’19
Torrance Johnson ’19 began singing when he was 11 months old. “There’s actually a recording of it,” he says. “My mom used to sing to me as a baby and I immediately caught on to it and have loved it ever since.”

A philosophy major from Chicago, Johnson has auditioned for Idol twice before, but this is his first time in the finals. “I think everyone had an equal chance of winning,” he says. “There’s so much talent in the group and I was blessed to be on stage with them.”

He was also fortunate, he says, to have family in the audience. “I definitely went into it with God, family, and friends, so it was a great time.” Like many Idol performers, Johnson sings in Cunningham’s Dartmouth College Gospel Choir. “After Dartmouth, I hope to pursue music professionally,” he says. 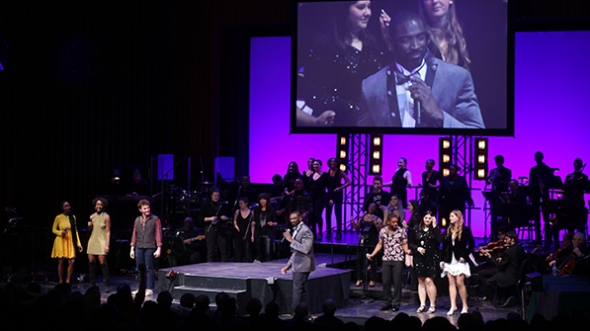 “There’s so much more to Dartmouth Idol than the prizes,” says Cunningham. “The contestants get better and more collaborative every year. At the end, whether they win or not, you can look at them and tell there’s joy in being involved and working with one another, with a 20-piece orchestra, 20 dancers, original music videos. I can’t think of any other college that puts on a program quite like ours.”