Posted on March 28, 2019 by Office of Communications

The College admitted 7.9 percent of its undergraduate applicants.

In offering admission to 1,876 prospective members of the Class of 2023, Dartmouth has set new milestones for undergraduate applications, selectivity, academic quality, socioeconomic diversity, and global representation.

The total number of admitted applicants includes 574 students who were admitted in December through the early decision program. Regular admission students learned of the admission decisions today.

From a pool of 23,650 undergraduate candidates, the College offered admission to 7.9 percent of its undergraduate applicants. The figures—both of which set new records—represent the broadening appeal of the College and its increasing selectivity.

“Our review of this impressive pool of candidates produced a truly remarkable collection of students whose academic excellence and dynamic personal narratives are compelling,” says Lee Coffin, vice provost for enrollment and dean of admissions and financial aid. “We met many interesting, intellectually engaged, curious, and creative individuals during this year’s admissions process, and we’re excited to imagine the impact they will make during their undergraduate years and beyond.

“In sharing Dartmouth’s story with the prospective Class of 2023 over the past 18 months, we encouraged them to share their stories with us. We were gratified by the response we received from our applicants, deeply impressed by their intellectual engagement and academic preparation, and inspired by their experiences, perspectives and aspirations,” Coffin says.

The admitted class is exceptionally well-prepared academically. Among those with a rank from their secondary school, over 95 percent are in the top 10 percent of their graduating class, including more than 500 who are projected to be either valedictorians or salutatorians. The mean SAT and ACT scores are at record levels, at 1501 and 33.1, respectively.

“Our review process is both holistic and highly individualized. We sought to develop as complete an understanding of each candidate as possible, including the various layers and facets they shared with us in their applications,” says Coffin. “With this in mind, we worked to admit individuals who through their diverse and complementary strengths, backgrounds, and interests offer the College the opportunity to enhance its already rich and robust community of scholars and creators.” 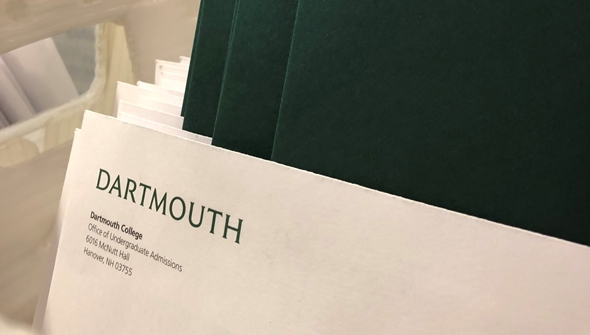 The admitted class includes students from all 50 states, the District of Columbia, Puerto Rico, and Guam, and from 69 other countries. The largest number of admitted students come from California, while over 40 percent are from southern and western states. Of the 12 percent of students who are international citizens, the United Kingdom, China, Canada, and Brazil are among the countries with the greatest representation. Both the number of countries and the percentage of international students are new records for the College.

Nearly half of the admitted students are Americans of color; 13 percent were raised in rural communities; and 16 percent are first-generation college-bound. Among those who included their faith tradition in their applications, 49 different faiths were represented. Nine percent are children of Dartmouth alumni.

Approximately half of the admitted students, among both U.S. and international citizens, qualify for need-based financial aid. Over 20 percent of the admitted class are lower-income students, with the vast majority of U.S. citizens in this group qualifying for federal Pell grants. The College has budgeted more than $30 million for scholarships for the enrolling class. The average individual award is currently more than $53,000. Dartmouth guarantees that families with total incomes below $100,000 and typical assets will qualify for scholarships that exceed the College’s tuition.

“Scholarships are a critical component of Dartmouth’s effort to attract and support this incredibly talented, promising, and diverse class. The socio-economic diversity and the support the Class of 2023 will receive from the College are both unprecedented,” says Dino Koff, director of financial aid.

Says Coffin, “By any measure, the admitted Class of 2023 is an outstanding assembly of individuals. We look forward to their enrollment this fall.”

The admitted-student reply deadline is May 1.

See a video (below) about members of the Class of 2022, welcomed this past fall by Lee Coffin, vice provost for enrollment and dean of admissions and financial aid.